Overall, this second of the year tournament had to be a wake-up call for the team in playing a very difficult course, under tough conditions (especially the first day) against an elite field.  Finishing 60 shots  back in 14th place of Oklahoma had to be a disappointment for all involved.  The second day 295 total was the one bright spot but the first and third days were tough for all of our players.

No doubt, though, having a rough outcome clearly shows our players what they need to work on to get back to the form we know they can reach.  Given our talent and depth, we can expect a strong response by our team in the upcoming events.

Next up (March 7-9) in just a few days is going to be another difficult challenge at world famed Bandon Dunes Trails course on the Oregon coast, where wind and unique conditions will face our team.  Notable is that freshman Michael Thorbjornsen had great success at Bandon Dunes in the US Amateur last summer, when he came close to winning it all under high wind conditions.  Will be fun to watch how the team bounces back. 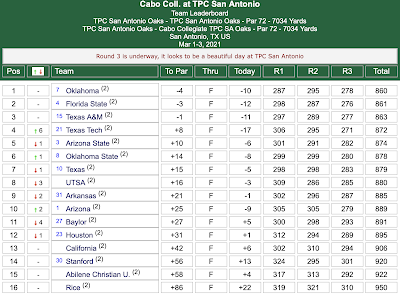 SAN ANTONIO, Texas - Freshman Michael Thorbjornsen was one of just 12 individuals in the entire 88-player field at The Cabo Collegiate to fire a score under par, highlighting the day for Stanford men's golf with his 1-under 71 on Tuesday. As a team, the Cardinal was 29 strokes better than Tuesday, shooting a 7-over 295 to move up two spots at TPC San Antonio Oaks. 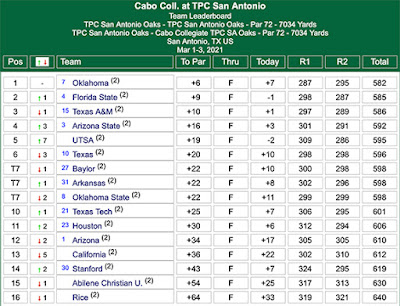 SAN ANTONIO, Texas - Stanford men's golf shot a 36-over 324 in the first round of The Cabo Collegiate on Monday, in what was cold and very windy conditions at TPC San Antonio Oaks Course. It leaves the Cardinal with some work to do over the final two days of the tournament, as it currently sits in 16th place. Only one team was better than 9-over on the day, as the conditions made for a tough round of golf. The field features 12 ranked teams, including six of the Top 10 in the Golfstat rankings.

ROUND ONE TEAM SCORES
Click on image to enlarge 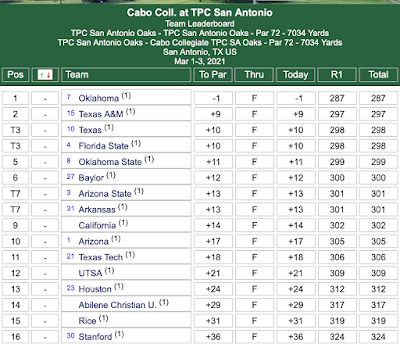 ROUND ONE STANFORD SCORECARDS
Click on image to enlarge