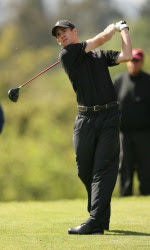 The most prestigious award in men's college golf, The Hogan is presented annually to the top men's NCAA Division I, II or III, NAIA or junior college golfer taking into account all collegiate and amateur competitions during the last 12 months. (More...)

Posted by richard lobell at 9:11 AM No comments:

Conrad Ray of Stanford will lead the United States against Europe in the 2008 Palmer Cup presented by Monster, the Golf Coaches Association of America has announced. The Ryder Cup-style showdown between teams of college stars from the United States and Europe will be played June 26-29 at the Glasgow Golf Club's Gailes Links.
See the complete Story
Posted by Bob Stevens at 8:15 AM No comments:


A member of the Stanford golf team is one of four golfers ever — including Tiger Woods — to capture eight American Junior Golf Association titles. He is also the first U.S. Junior Champion to enroll at Stanford on a golf scholarship since Tiger Woods in the mid 1990s. 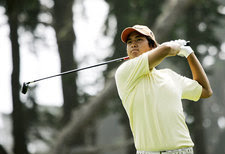 AP Photo of Sihwan Kim at 2007 US Amateur

Though he is young, the freshman tied for first individually at the CordeValle Collegiate Invitational in November and was runner-up last week along with senior captain Rob Grube in the Cardinal’s first team victory of the season. This long list of accomplishments may only be the tip of the iceberg for freshman Sihwan Kim, however.
(Complete story)
Posted by Bob Stevens at 12:46 PM No comments: 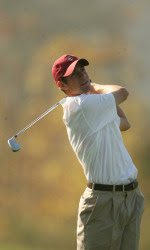 WAIKOLOA, Hawaii - The No. 10 Stanford Cardinal earned their first tournament crown of the season, retaining their second-round lead from yesterday and taking the UH-Hilo Invitational today at Waikoloa Village Golf Course in Hawaii. The Cardinal finished 16-under-par and shot 813 over three rounds, three strokes ahead of second place finishers No, 46 Arizona State and eighth-ranked USC. (Complete story)
Posted by Bob Stevens at 7:16 AM No comments: