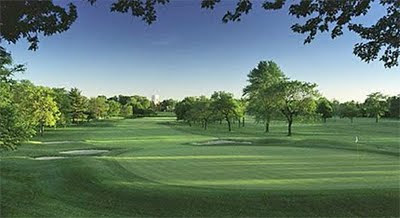 The 2009-10 tournament season began at Olympia Fields Country Club outside Chicago. Olympia Fields hosted the 2003 US Open and the event features a strong field led by the Cardinal who have been picked at pre-season #1 by GolfWeek.

Complete scoring can be found at golfstat.com at the tournament website: http://www.golfstatresults.com//public/leaderboards/team/static/team_players_1594.html
Posted by Bob Stevens at 6:45 AM No comments: 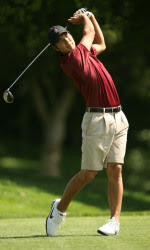 SOUTHHAMPTON, NY - The top-ranked Stanford men's golf team got its season off on a positive note on Tuesday, defeating Princeton, 3 ½ to 1 ½ in a dual match played at the famed Shinnecock Hills Golf Club in Southampton, NY.

The match was contested over 36 holes on at Shinnecock, site of four U.S. Opens.

The dual match served as a tune-up for the Fighting Illini Invitational, which will be held next week at Olympia Fields Golf Club outside of Chicago.
Posted by Bob Stevens at 6:40 AM No comments:

Stanford picked as pre-season #1 by Golfweek 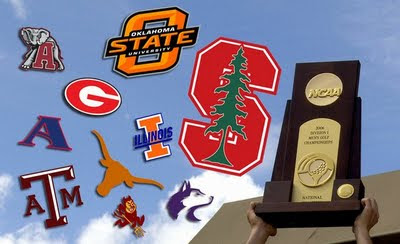 Can win national title if . . . Joseph Bramlett has a successful return from last year’s wrist injury and Sihwan Kim finds the form that made him a first-team All-American in 2008. Bramlett resumed practicing in July, then qualified for the U.S. Amateur later that month; Kim had a strong amateur summer, with top 5s at the Porter Cup and Northeast Amateur.

The Cardinal’s top returning player is Ziegler, a junior who finished last season No. 17 in the Golfweek/Sagarin College Rankings and was a member of the U.S. Palmer Cup team.

Any of these players has the ability to play No. 1 for the Cardinal. That kind of depth excites Ray, who likes to note that a low throw-out score was key to the Cardinal’s 2007 NCAA title.

The complete rankings can be found here: http://www.golfweek.com/news/2009/sep/09/college-preview-mens-teams/
Posted by Bob Stevens at 6:55 AM No comments: