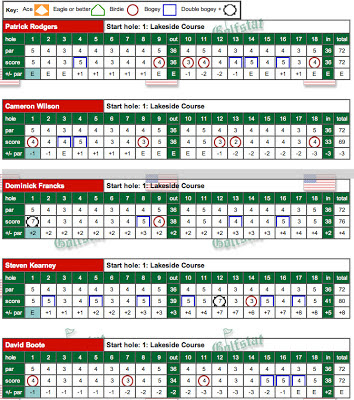 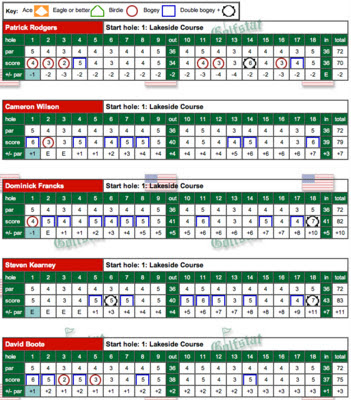 Background
The No. 13 (Golf Week) Stanford men's golf team heads back on the road this weekend to compete in the Pac-12 Preview hosted by the Oregon State. The 54-hole event will be held at Pumpkin Ridge Golf Club's Witch Hollow Course in North Plains, Ore.  The field is exceptional including six teams ranked in the top 30 in the most recent Golfweek rankings: California (1), Washington (5), UCLA (6), Stanford (13) Oregon State (27) and Colorado (30).

The final team scores are included below:
Preview


Featuring all 12 conference members, play on the 7,017-yard, par-72 course begins with 36 holes Monday and concludes with 18 Tuesday.
"The team is excited to compete in the Pac-12 Preview at Pumpkin Ridge next week," said Knowles Family Director of Golf Conrad Ray. "The conference is very strong this year and we will have our work cut out for us. I think we have some good momentum coming off a solid event at Olympia Fields, and I am eager to see how we play up there. The event should be a good measuring stick on where we stand at this point in the season."
Coming off a victory in his first event of the season at Olympia Fields, sophomore Patrick Rodgers is a strong contender to challenge for the individual title. Rodgers fired rounds of 72-68-67 (-3) at the Olympia Fields/Fighting Illini Invitational last week to win by five strokes.
Fellow sophomore Patrick Grimes will see his first action of the season. The Atherton native competed in nine events last season, carding a stroke average of 74.8.
Junior Andre DeDecker is coming off a solid performance at Olympia Fields where he tied for 39th after rounds of 73-74-78 (225, +15).
Freshmen David Boote and Dominick Francks will round out the lineup for the Cardinal. Boote had an impressive showing last week in his first collegiate competition, tying for seventh at Olympia Fields (214, +4). Francks, a highly regarded recruit from Olympia, Wash., is making his first collegiate start.
Posted by Bob Stevens at 8:24 AM No comments:

The first event of the 2012-13 tournament season is being played at the famed North Course at Olympia Fields Country Club outside Chicago, an event Stanford dominated in 2012 with a 16-stroke win. Olympia Fields North hosted the 2003 US Open plus three other majors and the event features a strong field.  Live scoring is provided by Golfstat.

FINAL RESULTS:
Super sophomore Patrick Rodgers repeated as individual winner with rounds of 72-68-67 207.  His 3-under total was the only under par score as he won by 5 shots.  Patrick's final round 67 included 4 birdies and only 1 bogey which added to his 2nd round 68 without a bogey blew away the field. Here's an excellent article by Golf Week on the tournament win by Patrick. Read excerpts from the article below.

Patrick's scorecards can be found below (click to enlarge):


As a team Stanford finished tied for 4th, 19 strokes behind winning Arkansas.
EXCERPTS FROM AN EXCELLENT GOLF WEEK ARTICLE:


“This is as close to home as it gets in college golf,” said Rodgers, who hails from the Indianapolis suburb of Avon, a three-hour drive from Olympia Fields. “It doesn’t get any better than the weather today.”
The final round was played in cool, windy conditions that sent amber leaves blowing past players’ balls. It was a perfect day to tailgate at a Big Ten football game. This tournament was dominated by visitors from the Southeastern Conference, though.
Arkansas shot 14-over 854 (283-278-293) to win by 13 shots over conference rival Florida. Cappelen, the 36-hole leader, struggled to 75 Tuesday, but Cook matched Rodgers’ 67. Illinois’Charlie Danielson also shot 3 under, matching the day’s low score.
Rodgers’ comfort in his native environs is underscored by his play here the past two years.
“I think just being back here, with the seasons changing, the bent grass and fast greens, he felt really comfortable here last year, and it carried over,” Stanford head coach Conrad Ray said. “He got a little bit better every day. That’s a fine round in those conditions.”
The same architect, Tom Bendelow, designed Olympia Fields’ South Course and Rodgers' home course, the Country Club of Indianapolis. Olympia Fields’ South Course, which played 7,080 yards, is slightly shorter than the North, forcing players to make decisions off the tee and defending itself with trickier greens.
Rodgers made just one bogey over the final 36 holes. He hit sand wedge to 15 feet on the second hole for Tuesday’s first birdie. He sank an 8-footer for birdie on No. 6 that he had to play “pretty much sideways,” then wedged close to birdie the par-5 seventh hole. He made bogey on the ninth hole before rolling off eight consecutive pars. His round ended with a 15-foot birdie putt on the par-5 18th.
“I was struggling a little bit with my swing during the first round, but I struck it great these last two days,” Rodgers said. “I kept myself in it with my short game on the first day, which gave me the opportunity to play well these last two rounds.”
The victory was his third in 13 career collegiate starts. He was a first-team All-American last year after representing the United States at the 2011 Walker Cup. Rodgers returned home from the Walker Cup just two days before the start of last year’s Olympia Fields Intercollegiate, driving from Indianapolis to meet the team for his Cardinal debut in this Chicago suburb. He hadn’t set foot on Stanford’s campus as a student before that victory.
This season starts with high expectations after his freshman success. He considered attending Q-School because of the PGA Tour’s drastic changes to its qualifying structure, but decided to stay in school. He played three professional events this summer, missing the cut at the PGA Tour’s Travelers Championship (72-73) and John Deere Classic (67-74), as well as the Web.com Tour’s Nationwide Children’s Hospital Invitational (76-73).
Things started to turn around later in the summer. He was third in his title defense at the Porter Cup and advanced to the second round of the U.S. Amateur.
He said he struggled at the start of the summer as he tried to make swing changes at Stanford. This was the first time he didn’t have regular access to his coach, Kurt Schier, who lives in Indianapolis.
“I’m getting back to some older positions,” Rodgers said. “I kind of got away from a few things that had me hitting it well.” Those struggles had their benefits, though. They helped him improve his short game and game management. He has implemented a new tee shot – a low cut with the driver – that will help him hit fairways on tighter holes.
“This is testament to the hard work I’ve put in,” Rodgers said, “and I just have to keep going forward.”
His sophomore season is off to the right start.


SECOND ROUND RESULTS:
Stanford advanced to a tie for 7th place after shooting the 3rd best round of the day, a 585 total, but is now 21 strokes behind as it lost ground to leading Arkansas.  The Cardinal is 9 behind the 2nd place team from Auburn.

Patrick's sparkling round, 2nd only to one at 67, was marked by all pars and two birdies on the front.  David Boote is having a fine start to his college career --- his 2nd round included 3 birdies on his final 5 holes.  Scorecards for round 2 are below:


FIRST ROUND RESULTS:
Stanford is tied for 9th, 14 shots behind after rounds of 72 (Patrick Rodgers), 73 (Andre De Decker and David Boote) and 79 (Steven Kearney and Shane Lebow).  The highest-ranked team in the field, No. 8 Arkansas, lived up to its ranking, shooting a first round 283 (+3). That's five strokes in front of Northwestern (288) and six better than third-place Auburn (289). Northwestern's Nicholas Losole was the only player to break par, firing a two-under par 68 to lead the field individually by two strokes over six players.

First round scorecards are below:

Posted by Bob Stevens at 6:02 AM No comments: