THIRD AND FINAL DAY FOR STANFORD:
Stanford improved it's previous best round by 10 strokes at 288 total (4 over par) in the 3rd round, but still wound up the stroke play portion of the championship in 20th place. Only the top 8 teams continue onto to the first match play portion in the tournament's history. Three of the 8 remaining teams are Pac-10 teams ASU, USC and Washington.

Senior Dodge Kemmer ended his career at Stanford with a fine 4-under 67 as he tied for 60th overall. Leading Stanford's in this event as he has much of this season, sophomore Steve Ziegler shot a final round 76 to finish tied for 30th, while sophomore Sihwan Kim had a 72, freshman David Chung a 73, and senior Daniel Lim an 83 in their final rounds.

SECOND DAY RESULTS:
It was a disappointing 2nd day for Stanford as they moved back in the standings to a tie for 25th with a team score of 14-over par 298 and after two days stands at 35-over par. Once again the back nine was the problem for Stanord with three golfers shooting 40 or higher. The Cardinal now is 35 shots behind the leading Oklahoma State team.

All Pac-10 performer Steve Ziegler fired a fine 69 and is tied for 16th overall at even par 142 while Daniel Lim had a 1-over 72. Others struggled as David Chung shot a 78 and Dodge Kemmer and Sihwan Kim had 79s. ASU and Washington remain in contention for the title in 4th and 5th place respectively at 7-over and 11-over par.

FIRST DAY RESULTS:
Stanford got off to a solid first 9 holes (starting on hole 10) but the back nine proved to the undoing for the team as they ended the first day of play 21 over par and in a tie for 22nd, or 17 shots behind the leading Georgia and Oklahoma State teams at 4 over par. After going out in 3-over par on the first 9 holes, scoring for the Cardinal ballooned to 17-over for the last 9 holes. Steve Ziegler led the way with a 2-over 73 followed by Dodge Kemmer's 76, Sihwan Kim's 77, Daniel Lim's 79 and David Chung's 81. Washington is the leading Pac 10 team in a tie for 4th place at 9 over par.

Full scoring can be found at http://www.golfstatresults.com//public/leaderboards/team/static/team_players_1495.html
Posted by Bob Stevens at 6:18 PM No comments:

Stanford will be moving onto the NCAA Finals to be played at the Inverness Club in Toledo, OH, after finishing 4th at NCAA Regional play in Austin, Texas.

FINAL RESULTS: Battling a tough course and 6 other teams with a chance to make the top 5 and qualify for the NCAA Championship, the Cardinal came thru with the day's 2nd best round of 11 over par. For the 2nd straight day Stanford was led by senior Dodge Kemmer with another 1-under 70 as he finished tied for 4th individually. All-American sophomore Sihwan Kim fired a 1-over 72 to finish tied for 12th, while freshman David Chung bounced back from two higher rounds with a 73 to finish tied for 56th overall. All-Pac-10 sophomore Steve Ziegler struggled to a 79 to finish tied for 37th and senior Daniel Lim carded an 81 to also finish tied for 56th.

Congrats to the team for a hard fought tournament in which everyone made significant contributions. Joining Stanford from this regional were Florida, Texas Tech, host Texas and Michigan. Cal finished in 9th place 8 shots off the cut-line to qualify.

Full tournament scoring is available by GolfStat.com at

DAY TWO RESULTS: After a tough 2nd round, the Cardinal is in a battle for one of the top 5 spots to move on to the NCAA finals. Stanford sits in 5th position at 25 over par --- there are six other teams within 9 shots of Stanford's score so almost the entire field is still alive. The top three teams have a clear lead with Florida in 3rd at 12-over par and UNLV at 17-over, or 8 shots better than Stanford. 2nd round play included Kemmer's 70, Kim's 74, Ziegler's 77, Chung's 78 and Lim's 79. No doubt play will need to improve on the last day for Stanford to move on.

ROUND ONE RESULTS: Stanford finished the day in 4th place at 10-over par, a total of 12 shots behind Texas Tech. Steve Ziegler had a 1-under 70 to tie for 3rd, while Daniel Lim had a 73, Sihwan Kim a 75, Dodge Kemmer a 76 and David Chung a highly unusual for him 82. Only one team played there way out of the chance to finish in the top 5 and move on to the NCAA championship finals.

A total of 7 Pac-10 have advanced to the final stage of the NCAAs from the six different regionals including Washington, ASU, Arizona, Oregon, USC and UCLA. Regional results can be found at http://www.golfstatresults.com.

PRE-TOURNAMENT REPORT: Stanford earned a top seed in the Austin regional in Texas. One of 9 Pac-10 teams moving on to 6 regionals around the country, the Cardinal join USC and Washington as top seeds in the tournament reflecting the recent dominance of the NCAA championship in recent years. Cal will be joining Stanford in the Austin regional. Stanford's team includes sophomores Steve Ziegler and Sihwan Kim, freshman David Chung and seniors Dodge Kemmer and Daniel Lim.

Play began at the University of Texas golf course May 14 and continued thru May 16 with the low 5 teams out of 13 teams in the region moving on to the NCAA Championship Finals to be held May 26-30 in Toledo, Ohio. Stanford comes off a national championship finish in 2007 and a runner-up finish in 2008. A total of 81 teams in 6 regionals around the country will be competing for a total of 30 spots in the finals, with 5 teams from each region moving on.

Click here for a complete recap of the NCAA regionals around the country.
Posted by Bob Stevens at 6:21 AM No comments:

STANFORD, Calif. - As reported at the gostanford.com website, Sophomore Steve Ziegler and freshman David Chung both earned All-Pac-10 honors, as the annual awards were released today by the conference. Click here for the complete announcement from the Pac-10. 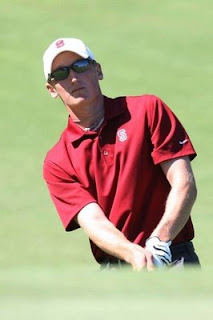 Ziegler earned first-team All-Pac-10 honors after being named an honorable mention last year. The Broomfield, Colo. native carries a 72.3 stroke average over 30 rounds. He collected five top-ten individual finishes and three top-25 places over the year along with shooting a low round of 65 at the USC/Ashworth Collegiate Invitational, where he picked up his only individual crown of the season, and posting his best three-round total of 202 at the U.S. Intercollegiate. 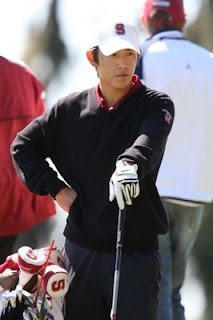 Chung was selected second-team All-Pac-10 in only his rookie season. The freshman out of Fayetteville, N.C. has recorded a 73.17 stroke average so far over 30 rounds and has picked up two top-10 finishes, including his best at the U.S. Collegiate Championship at the Golf Club of Georgia, where he took third. He also notched four top-25 finishes, carded a low-round of 66 in Georgia and a three-round low of 209 at the USC/Ashworth Collegiate Invitational.

The Cardinal will learn Monday which NCAA Regional competition they will be competing in as it tries to qualify for its third straight NCAA Championship.

In an unprecedented sign of the times perhaps, five of the nine first team honorees are from outside the US including co-players of the year Matthew Giles (USC-Australia) and Nick Taylor (Washington, BC).
Posted by Bob Stevens at 6:05 AM No comments: