Three Stanford golfers placed in the top four spots in the Porter Cup tournament played at Niagara Falls Country Club. Playing against a strong field of college players and other amateurs incoming freshman Andrew Yun tied for first and lost in a playoff while David Chung and Sihwan Kim tied for fourth place.

Incoming freshman Andrew Yun of Chandler, Arizona, finished tied for 43rd while All-American Steve Ziegler missed the cut in the 103rd Southern Amateur held in Cordova, Tennessee, at the Chandler Country Club. Andrew had rounds of 70-74-72-73 to finish 17 strokes behind the winner while Steve had disappointing rounds of 72-74.

The next event with Stanford players entered should be the Porter Cup July 22-25 where at least 3 Cardinal golfers are scheduled to play, David Chung, Sihwan Kim and Andrew Yun again.
Posted by Bob Stevens at 6:00 AM No comments:

All-American junior to be Steve Ziegler continued his fine summer play with a marathon win in the Colorado Golf Association match play championship. Below are results from the Player's Amateur where David Chung, Graham Brockington and Dodge Kemmer competed.

The following excerpt is taken from Colorado Golf Journal's report on the tournament:

Steve Ziegler of Broomfield was the beneficiary of the last switch in momentum as he won the last three holes of the match for a 1-up victory and his first CGA championship.

“I was absolutely pumped” despite being 2 down to Gempel with three holes left, said Ziegler, a 20-year-old junior-to-be at Stanford. “I was on the ropes.”

But Ziegler turned out to be the last man standing as Gempel apparently ran out of gas and finished double bogey-bogey-bogey. The recent University of Colorado graduate missed a 2-foot par putt -- his second of the final 18 holes -- on the 36th hole to end the match.

“I was surprised he finished the way he did,” Ziegler said of Gempel. “But this whole week I was trying a new match play philosophy. I was playing the course and old man par. It made all the difference this week. I was just forgetting about what my opponent did.”

Gempel tried to be philosophical about what happened down the stretch.

“I’m pretty disappointed," he said. "But I played about as well as I’ve played in a long time. I’ve come a long way in the last month. I was once this close to quitting golf. So I’m proud of the way I played.”

Ziegler was pushed for the first time all week. In his first five matches at Bear Creek, the player from The Ranch Country Club was 18 under par and his closest match was 4 and 3. On Friday, he played his first nine holes in 5-over-par 41, but was 2 under for his final nine. That included a 78-yard hole-out for an eagle on the par-4 10th hole that squared the match. And though Gempel rebounded to regain the momentum with birdie putts of 1 foot, 8 feet and 8 feet in the middle of the back nine, Ziegler prevailed in the end.

For Ziegler it was another in a long list of impressive accomplishments in the last several years. He’s won two state high school titles, claimed his first college victory, was one of eight American college players selected for the prestigious Palmer Cup team and made the round of 16 at last month’s British Amateur. And now he‘s the 2009 CGA Match Play champion.

Winning a CGA title for the first time “is huge,” Ziegler said. “It’s been a giant monkey on my back. I’ve played in (CGA) events since I was a kid, and they’re difficult to win. It’s a huge accomplishment. I’d put it up there alongside my state (high school) wins and my first college win.”

In the US Public Links event where Sihwan Kim qualified to compete, Sihwan failed to make match play by two strokes after rounds of 74-77. Sihwan was playing at the Jimmy Austin OU Golf Club in Norman, Oklahoma. Complete results can be found here.
Posted by Bob Stevens at 8:18 AM No comments: 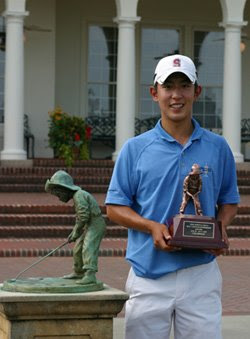 David defeated Wes Bryan 4 and 3 in the 36-hole final. The grueling event included 5 other matches to reach the finals. Steady and at time spectacular play by David marked his run through the tournament. In every match on the fames, tough Pinehurst #2 course David was no worst than even par.

Complete hole-by-hole scoring for all of David's matches can be found at http://www.golfstatresults.com/public/leaderboards/match/singles_detail.cfm?tournament_id=1590∣=63

David's hometown newspaper, the Fayettville Observer, provided this story. A press release from Pinehurst is included below and here you will find a story in the Southern Pines Pilot. In addition, here's GolfWeek's story on David's win.

VILLAGE OF PINEHURST, N.C. (July 4, 2009) – “No mistakes” is what Fayetteville, N.C. native David Chung needed and delivered to win the 109th North & South Men’s Amateur Championship on Saturday with a 4-and-3 win over Chapin, S.C.-native and South Carolina Gamecock golfer Wes Bryan.

“I knew I had a really tough match against Wes today,” said Chung, the Stanford rising sophomore, following play. “You have to hang in there for the first 18, but with the second 18, all that match play raises the level of intensity. It was grueling after three days of 36 holes.”

Neither player appeared tired throughout the day, trading birdies and holes throughout the round. The match was all-square through the first 12 holes, when Chung carded back-to-back birdies on holes 13 and 14 to take a 2-up lead. Chung missed a par putt on 15th to lose the hole with a Bryan par, and followed it by a par 5 on the 16th to Bryan’s birdie to set the match back to all-square. Bryan nailed a 10-footer on the 18th for birdie, but Chung would hold on to par with a 20-footer to end the morning’s play at 1-up, Bryan.

Although Bryan would card a winning par and birdie on the 21st and 22nd holes to go 3-up, The afternoon holes took a decisive turn with Chung’s 20-footer on the 23rd hole to set the match at 2-up, Bryan. Chung would take charge directly following with five birdies in the next 10 holes - the 26th, 28th, 31st, 32nd and 33rd holes. With birdies again on the 13th and 14th holes of Pinehurst No. 2, the short par-3 15th would set Chung for a birdie putt 10 feet from the hole. Bryan flew the green and putted from the back left swale past the hole, rolling to the front side of the green. Bryan would land within 4 feet of the hole on his 3rd shot, but Chung sunk his final birdie of the day to settle the match at 4-and-3.

“It means so much to me to win at Pinehurst,” said Chung. “It is very special and very important, especially in living 40 miles from here. I’ve played this course a lot, I came here for the Opens and had a system in playing these greens. I practiced a lot of putting off the greens.”

This is the third time Chung has competed in the North & South Amateur Championship. In winning, his name will be added to the Pinehurst Heritage Hall plaque for North & South Champions, which also includes Francis Ouimet, Jack Nicklaus, Curtis Strange, Davis Love and many other greats of the game.

He heads to Hilton Head for a tournament before returning to Pinehurst in two weeks to caddie for his sister, who will play in the Women’s North & South beginning on July 14.

About Pinehurst
Located in the North Carolina heartland, world-renowned Pinehurst Resort is a 2,000-acre historic property featuring spa, golf, tennis, family, events and leisure recreation. Widely known as the cradle of American golf, it has hosted more single golf championships than any other site in America, including the U.S. Open, PGA Championship, Ryder Cup Matches, PGA Tour Championship and many others. In 2008 it became the only resort to top the coveted Travel +Leisure Golf Best Golf Resort list for an unprecedented third time, as chosen by its readers. Pinehurst is a registered trademark of Pinehurst, LLC. See pinehurst.com or call 800-487-4653 for a complete list of events and activities.
Posted by Bob Stevens at 5:37 AM 4 comments: