2021 Season Begins with the Prestige at La Quinta, CA

The Prestige | Live Scoring by Golfstat.com

FINAL ROUND RESULTS:
LA QUINTA, Calif. - Stanford men's golf fired a field-best 8-under 276 in Wednesday's final round at The Prestige, moving up 12 spots to finish the event in sixth place. It was the Cardinal's first even in nearly a year, since the 2020 Cabo Collegiate (March 1-3). Stanford was one of just two teams in the entire 24-team field under par on Wednesday. The team's 276 was tied for the best round of any team the entire week, 16 strokes better than the Cardinal's Monday round and 21 strokes better than Tuesday.Sophomore Barclay Brown led four Cardinal under par on Wednesday, firing a 3-under 68 to jump 35 spots on the leaderboard. it was Brown's fourth career round in the 60s and his ninth career round (out of 18) at par or better. Senior Ashwin Arasu matched his best career round with a 69 on Wednesday, marking his fourth career round in the 60s.Freshmen Karl Vilips, who shot a 2-under 69 for the second time in the tournament, paced all Cardinal in finishing tied for 12th. He totaled a 1-over 214 for the tournament, followed closely by fellow classmate Michael Thorbjornsen, whose 1-under 70 on Wednesday was his first round at Stanford under par. Thorbjornsen improved from 56th before the day to a tie for 21st to close the tournament.

ROUND TWO RESULTS:
LA QUINTA, Calif. - Playing in its first tournament in nearly a year, Stanford men's golf completed the second round of The Prestige on Tuesday. The tournament is being played on the Greg Norman Course at PGA WEST. The Cardinal shot a 13-over 297 on Tuesday and moved up two spots.Fifth-year senior Henry Shimp led the way on Tuesday, firing a 1-over 72 with five birdies in the round. He sits at 6-over, third on the team, and behind two freshmen in Karl Vilips (+3) and Michael Thorbjornsen (+4). Stanford will once again tee off at 6:45 a.m. on Wednesday.
ROUND ONE RESULTS:
LA QUINTA, Calif. - Stanford men's golf, the defending NCAA champions, returned to the course on Monday for the first time in 349 days. The Cardinal last competed on March 3, 2020 at The Cabo Collegiate. Stanford shot a first-round, 8-over 292 to begin the 2021 season at The Prestige, being played at the par-71, 7,100-yard Greg Norman Course at PGA WEST. Stanford debuted two highly-touted freshmen in Karl Vilips and Michael Thorbjornsen, while rounding out the lineup with Ashwin Arasu, Barclay Brown and Henry Shimp. Both lived up to the hype in their debut rounds, with Vilips firing a 2-under 69 to lead the way with five birdies. He currently sits in a tie for seventh heading into the second round on Tuesday. Thorbjornsen tallied four birdies in the round and sits tied for 25th following his even-par 71.
BACKGROUND
The season uncertainly caused by the Covid Pandemic remains but the official start begins at The Prestige in La Quinta, CA played at the Greg Norman course at PGA West.  Stanford comes into the season as the defending national champions from the 2018-2019 season, as not championship was held in 2020.
The Cardinal brings an exciting new chapter to the team with the arrival of the #1 recruiting class in the country, led by two top five recruits, Karl Vilips and Michael Thorbjornsen.  Karl and Michael will be in the starting lineup along with sophomore Barclay Brown and two seniors, Henry Shimp and Adwin Arasu.
The strong field includes a total of 24 teams.  Among the teams, as ranked by the Golf Channel, are preseason #1 ranked ASU, #18 Arizona, #19 Stanford and #28 North Carolina.
As individuals, the field will include the preseason #5 ranked Kevin You, senior from ASU, #6 ranked William Mouw, sophomore from Pepperdine, #13 ranked sophomore David Puig from ASU, #19 ranked freshman Karl Vilips from Stanford and #21 ranked freshman Michael Thorjornsen, also from Stanford. 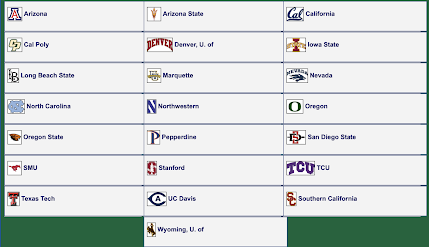