Three top recruits, Meyers, Salinda and Wu, are coming to the Farm in 2015

Salinda, Wu and Myers will begin their academic and athletic careers at Stanford beginning in the fall of 2015.

“We are extremely excited about our 2015 recruiting class,” said Ray. “All three student-athletes are tremendous golfers based on achievements to date, but also have many of those intangibles that we look for in our prospects including strong character, work ethic, and team first attitude. All have enjoyed local, state, and national success, and we believe those level achievements will translate and continue well into their time at Stanford.” 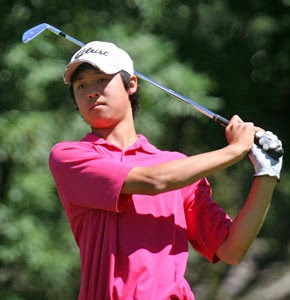 GolfWeek Profile
Posted by Bob Stevens at 10:09 AM No comments:

“I’m happy the guys hung in there and ended on a high note with the best round of the day,” said Conrad Ray, the Knowles Family Director of Men’s Golf. “The fall was a productive campaign for us, with everyone seeing action and picking up valuable experience. We have a lot of work to do in the offseason, but we are excited about this team and our potential.”

Stanford was one of two teams (the winner UCLA being the other) with three players finishing in the top 10 individually.  The day's best round was posted by freshman Franklin Huang firing 7 birdies and one bogie to finish with a sparkling 66 leading to his excellent tied for 8th finish (73-71-66 210).  Overall Stanford was led by Viraat Badhwar's 7th place finish on rounds of 69-71-69 209 followed by David Boote, who also tied for 8th on rounds of 68-73-69 210.

Final round team and individual scoring, plus scorecards are shown below --- click on image to enlarge.
Round 2 Results:
It was a very steady round for all 8 players as the Cardinal moved into 4th place but 21 strokes behind USC and 18 behind UCLA.   The three freshmen led the way in round 2.   Low man with a sparkling 3-under par 68 was freshman Jeffrey Swegle playing as an individual in only his first collegiate event.  Jeffrey's round included 5 birdies and two bogies and moved him into 17th place (74-68 142).

All scorecards and team scores for round two are shown below --- click on the image to enlarge.
Round 1 Results:
Stanford finished round 1 in 5th place with a 7-over par total of 362, 9 strokes behind USC.  David Boote led the way with a 68 to tie for 4th, followed by Viraat Badhwar's 69 which left him tied for 7th.  Franklin Huang finished 2-over at 73, Maverick McNeal was 4-over at 75, Patrick Grimes shot a 77 and Bradley Knox finished at 79.  Dominick Francks and Jeffrey Swegle, playing as individuals, had solid opening rounds of 73 and 74 respectively.

Team scorecards and standings for round 1 are shown below --- click on the image to enlarge.
Background
Stanford brings 8 players to the Gifford Collegiate played at a tour caliber venue, the CordeValle GC which has hosted both senior events and the PGA Tour's Fry's tournament.  CordeValle is located only 45 miles south of the Stanford campus.  Stanford last played in this event in 2012 when the team finished 2nd led by Cameron Wilson's course record 61 in his opening round.

Six players (sophomores Maverick McNealy and Viraat Badhwar, junior David Boote, senior Patrick Grimes and freshmen Franklin Huang and Bradley Knox) will compete in the championship with five scores counting each of the three rounds.  In addition, two individuals will be competing, junior Dominick Francks and freshman Jeffrey Swegle (who will be making his collegiate debut).