STANFORD, Calif. - The seventh-ranked Stanford men's golf team finds itself back in action this coming week and will be participating in the 2008 United States Collegiate Championship, hosted by Georgia Tech, at The Golf Club of Georgia in Alpharetta, Ga. The three day, 54-hole tournament begins on Monday, March 24 at the club's Lakeside Course and features 8 of the top-10 teams in the nation. (More...)
Posted by richard lobell at 8:20 PM No comments:

Begay returns to Europe after long-term back injury

SANTO DA SERRA, Madeira (Reuters) - American Notah Begay returns to Europe in the hope of resurrecting his career this week after nearly a year out of action with back problems.

The four-times U.S. PGA Tour winner has passed up a chance of playing the Nationwide Tour, America's second-rated tour, to fly to Europe to take up a one-year medical exemption.

More - see Full Article
Posted by Bob Stevens at 5:57 AM No comments:

Eighth-ranked Cardinal Head To Southern California For The Ashworth Invitational 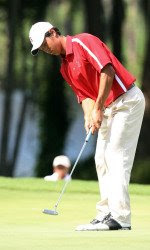 STANFORD, Calif. - The eighth-ranked Stanford men's golf team will be back in action starting Monday, March 3, as they travel to southern California to defend last year's victory at the Ashworth Collegiate Invitational at North Ranch Country Club in Westlake Village, Calif. The two-day tournament, hosted by USC, will feature three rounds of action on the par-71 course.


Posted by richard lobell at 9:04 AM No comments: