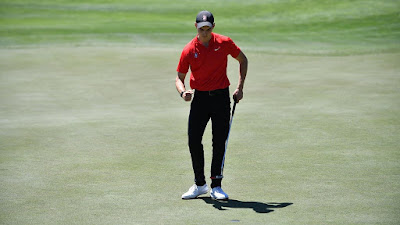 Posted by Bob Stevens at 5:53 PM No comments:

SANTA CRUZ, Calif. - Stanford men's golf shot a 3-under 347 on Wednesday to finish second at the 74th Western Intercollegiate at Pasatiempo Golf Club. The Cardinal were led by three finishers inside the top eight: Karl Vilips (tied for sixth), Henry Shimp (tied for sixth) and Barclay Brown (eighth). Stanford's 3-under was the second best round of the day behind team champion, Pepperdine.

Shimp's final-round 66 (-4) was Stanford's best round of the day as he catapulted into his sixth-place finish. For the fifth-year senior from Charlotte, N.C., his 66 was the best round of his collegiate career, surpassing his previous best of 68, which he'd recorded seven times. His 1-under 209 matched his career-best 54-hole score (2019 Western Intercollegiate) while his T6th finish was a career best.Vilips, a freshman, registered his best collegiate finish, bolstered by his second-round 65 on Tuesday. Brown shot back-to-back 69s over the final two rounds to earn his eight-place finish. Freshman Michael Thorbjornsen finished tied for 15th, his second Top 15 finish in the last three tournaments (T14th at The Goodwin). Ethan Ng rounded out the Cardinal scorers on Wednesday with a final-round, 1-under 69 to finish tied for 26th. On the individual side, Nate Menon led the Cardinal with a career-best finish of tied for 13th. His 2-under 68 on Wednesday was Stanford's second-best round of the day. David Snyder fired a 69 on Wednesday to finish tied for 21st on the individual side.Stanford now turns its attention to postseason play, which begins with Pac-12 Championships (April 26-28) at Mayacama Golf Club in Santa Rosa, Calif.

ROUND TWO RESULT: by Stanford Athletics - Round Two Article

SANTA CRUZ, Calif. - Behind freshman Karl Vilips' 5-under 65, Stanford men's golf moved up into third-place at the 74th Western Intercollegiate at Pasatiempo Golf Club on Tuesday. The Cardinal shot a 2-over 352 with Vilips posting the field's best score.

ROUND ONE RESULTS: by Stanford Athletics - Round One Article

SANTA CRUZ, Calif. - Stanford men's golf began its title defense at The 74th Western Intercollegiate on Monday at Pasatiempo Golf Club and currently sits in fourth place following an 8-over 358. The event, which is a play-six, count-five, saw all five Cardinal scorers inside the Top 28 following the first 18 holes of action.Playing as an individual, senior Nate Menon fired Stanford's best round of the day with an even-par 70. The highlight of the day came from Jake Beber-Frankel, whose first collegiate ace came with a 52-degree wedge on the 141-yard 15th hole.

Posted by Bob Stevens at 7:26 AM No comments: 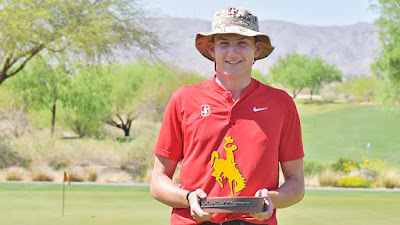 CHANDLER, Ariz. - Sophomore Barclay Brown fired a 7-under 65 on Tuesday at The Cowboy Classic to earn his first career collegiate win. As a team, Stanford finished fifth out of 23 teams, shooting a 19-under 845, which included identical 8-under 280s in each of the last two rounds.  See full scoring details below including each round scorecards and final team standings.

"I'm mainly relieved to get my first win out of the way so I can try to get some more without the pressure of never having won one," Brown said. "It's nice to have something myself and now hopefully our team can push on for the rest of the season. Everything is moving in a pretty good direction for us and we are excited about that.""I'm really happy for Barclay," The Knowles Family Director of Men's Golf Conrad Ray said. "He played tremendously and relied on a hot putter today. His game has been trending and he had a little extra confidence this week after making the Walker Cup. Good things are ahead and it's great to see him lead us."The round, which catapulted Brown to a tournament-best 14-under 202, was his third career round of 65-or-better. The South Yorkshire, England native has now shot in the 60s for 10 of his 28 collegiate rounds. He became the first Cardinal to win individual medalist honors since Isaiah Salinda claimed the 2019 Stanford Regional honors following his win at The Western Intercollegiate that same season.For the second consecutive tournament, Ethan Ng finished tied for 14th, shooting a 5-under 211 over the last two days. The Cardinal will be back in action next Monday through Wednesday for The Western Intercollegiate at Pasatiempo Golf Club. GOLF Channel will have coverage of all three days, in what is scheduled to be Stanford's final event before beginning postseason action at the Pac-12 Championships on April 26.

Posted by Bob Stevens at 6:06 AM No comments: