Match Play Day 2 Results:
Stanford finished match play by beating San Diego State 3-1-1. Overall that left the Cardinal in 5th place out of 16 teams with an overall match play record of 8 wins, 6 losses and 1 match tied. David Chung, Steve Ziegler and Sihwan Kim won their matches by 2-1, 1-up and 1-up respectively. Dodge Kemmer halved his final match while Daniel Lim lost his only match 3-1. Complete match results vs San Diego State can be found here.

Match Play Day 1 Results:
Stanford lost a heartbreaker to #1 seed Indiana in the first round of match play by a 3-2 score. David Chung won his match 5-3 while Daniel Lim was a 2-1 winner. After leading all the way, with 3 holes remaining Steve Ziegler was tied but lost 16 & 17 to fall 2-1. With two holes remaining Dodge Kemmer was tied and lost the 17th and tied the 18th to lose 1 down. And Sihwan Kim was 1 down with 4 to play and lost the next two to lose 3-2. Full first round match play detail can be found here.

In the afternoon's consolation bracket match versus Texas A & M, Stanford won the hard fought contest when Daniel Lim won his final two holes for a 2-up victory. Other wins came by Sihwan Kim (4-3) and Dodge Kemmer (2-up). Stanford will now face 2nd seeded San Diego State. Full 2nd round match play results can be found here.

Stroke Play Qualifying Results:
Stanford moved into the championship bracket of the Callaway Collegiate match play event played at the Farms GC in Rancho Santa Fe, CA. Once again Stanford was led by recent tournament winner, sophomore Steve Ziegler, with qualifying rounds of 72-74 which placed him in a tie for 10th individually.

Playing in windy and sometimes wet conditions, other individual scores were Dodge Kemmer's 72-77, Daniel Chung's 74-78, Daniel Lim's 79-78 and Sihwan Kim's 82-75. As a result of qualifying in a tie for 7th Stanford receives the 8th seed in the championship bracket and moves onto a head-to-head match with the number 1 seed Indiana which finished 16 shots ahead of the Cardinal.

Two matches per day will determine the match play results, with the first round winners moving ahead in the championship bracket while the loser will move into the consolation bracket.

The event is held at the Farms Golf Club.
Posted by Bob Stevens at 7:12 AM No comments: 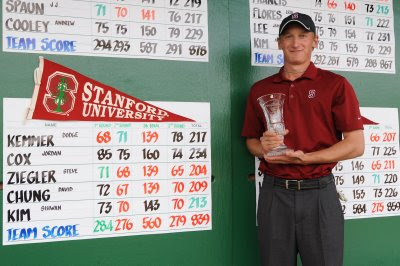 Steve Ziegler received both national recognition as Men's College Player of the Week from Golf World and Pac-10 honors being named golfer of the month for February.

NEW YORK - Golf World has announced its "Men's College Player of the Week" for the period between February 23 and March 1. The feature will appear in the March 9 issue of Golf World and can be viewed online now at www.golfworld.com.

This week's honoree is sophomore Steve Ziegler of Stanford. Ziegler hadn't had a round lower than 70 all season until closing with a 68-65 to win the USC/Ashworth Collegiate Invitational. His nine-under 204 also helped the Cardinal claim the team title by 10 strokes over BYU. Ziegler has a 72.50 average in six tournaments this season, and he has now finished in the top-11 three times in 2008-09.

See the next article below for complete summary of the Ziegler's great tournament plus the Cardinal's first win of the season. The team's win at USC has moved Stanford to 3rd on the Golf Digest/Golf World's rankings.

The Pac-10 named Steve the golfer of the month with the following announcement: "Ziegler, a sophomore from Broomfield, Colo., won his first career collegiate individual title in capturing medalist honors at the USC Collegiate Invitational. He fired a nine-under 71-68-65--204 to win the event by a single stroke and lead Stanford to the team title. His career-best round of 65 on the final day included six birdies on the back nine. Ziegler also posted a top-10 finish in Stanford's other tournament in February, placing seventh at the UH Hilo Intercollegiate. Ziegler was under par in four of six rounds for the month (and even par in the other two) with a 69.5 stroke average in the two tournaments."