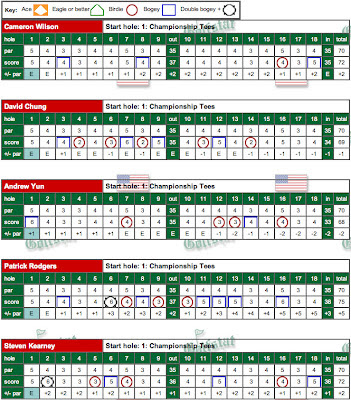 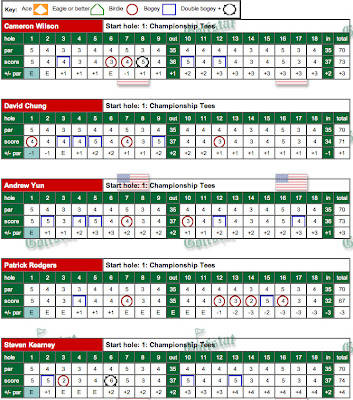 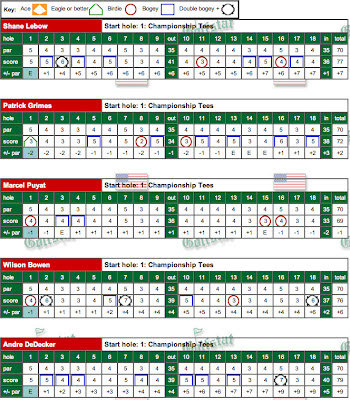 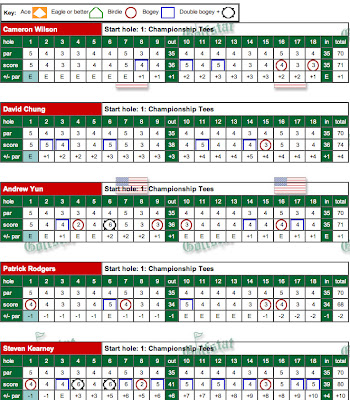 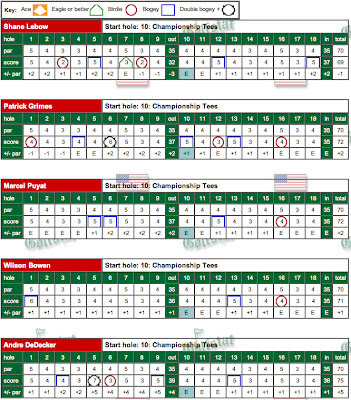 March 28, 2012 gostanford.com backgrounder:
STANFORD, Calif. - The Stanford men's golf team hopes this weekend's U.S. Intercollegiate on its home course will provide a big dose of momentum heading into championship season, which begins with the Pac-12 Championships in late April.
Three squads currently ranked in Golfweek's/Sagarin top-10 headline the 16-team U.S. Intercollegiate field, including No. 4 UCLA, No. 5 USC and No. 7 Washington. Stanford and Oregon are ranked 11th and 12th, respectively, in the latest Golfweek/Sagarin ratings while San Diego State is ranked 13th. Colorado, Fresno State, Nevada, Oregon State, Pepperdine, San Francisco, San Jose State, UC Davis, Utah and Washington State round out the field. Teams will play 18 holes over three days beginning on Friday at Stanford Golf Course (par-70; 6,727 yards), teeing off on holes No. 1 and 10 at 8:00 a.m. each day.
Stanford will enter two squads in this event. The "red" team will consist of (in order) Cameron Wilson, David Chung, Andrew Yun, Patrick Rodgers and Steven Kearney, while the black team will be made up of Shane Lebow, Patrick Grimes, Marcel Puyat, Wilson Bowen and Andre DeDecker. Rodgers, ranked fifth in Golfweek's most recent individual rankings, is the highest-rated player in the field, followed by Chris Williams of Washington and Eugene Wong of Oregon, who are ranked No. 6 and 9 respectively.
San Diego State has two players ranked in Golfweek's top 20 in Todd Baek (12th) and J.J. Spaun (15th), while USC's Steve Lim is ranked 18th.
The Cardinal opened the spring with a solid third place showing at the Amer Ari Invitational on the Big Island before finishing ninth at the San Diego Intercollegiate Classic and fifth at the Southern Highlands Collegiate Masters. Stanford will participate in the Western intercollegiate at Pasatiempo Golf Club on April 14-15, which will be its final tune up prior to the Pac-12 Championships, slated for April 27-29.
The Cardinal will only have to look out its front door this weekend to find a measuring stick of its competition. "This will be a good warm up for the Pac-12 Championships," said Ray. "Our conference is so stacked with UCLA, USC, Washington and Oregon all playing at a high level. We're anxious to see how we compete at this time of year." Even though Stanford's last U.S. Intercollegiate title came in 2007, Ray is hoping course knowledge will play a key role in the Cardinal's fortunes this weekend. "Knowing the course should work in our favor and serve as a good prep for the NCAA Regionals which we will host in May. It's never too early to start building momentum." Oregon won the last U.S. Intercollegiate played in 2010 with a score of 839 (-1), while Duck Daniel Miernicki earned medalist honors with a score of 202.
Posted by Bob Stevens at 7:18 AM No comments:

Cardinal competes in Las Vegas vs an elite field

Next up for the Cardinal will be to host the US Intercollegiate at Stanford March 30 thru April 1st.  Final round scorecards can be found below -- click to enlarge.

SECOND ROUND RESULTS:
Stanford (ranked 12th) finds itself tied for 4th with UCLA (ranked 5th) after two rounds, 10 shots behind the leader Cal (ranked #10) and 1 shot ahead of nationally top ranked Texas.  Host UNLV (ranked 11th) is in 2nd 6 shots behind Cal and Texas A & M (ranked 15th) is in 3rd another stroke behind.  Third ranked Alabama is 4 strokes behind Stanford.

FIRST ROUND RESULTS:
Stanford is tied for 5th place after round 1 in the Southern Highlands Collegiate played in Las Vegas and hosted by UNLV.  Cameron Wilson led the way with a 2-under 70, followed by Andrew Yun's 72, Patrick Rodgers and David Chung at 75 and Steven Kearney at 76.  Round 1 scorecards can be found below -- as always click to enlarge.  Five of the nation's top 10 schools are competing.  The dramatic Southern Highlands golf course was co-designed by the late Robert Trent Jones Sr. and his son Robert Trent Jones, Jr.

Background by gostanford.com on 3/8/12
STANFORD, Calif. -- - Stanford resumes its spring schedule this weekend at the Southern Highlands Collegiate Masters in Las Vegas, Nev., where five of the top-10 teams in the nation highlight one of the spring's most elite fields.
Teams will play 18 holes over three days beginning on Friday at the Southern Highlands Golf Club (par-72; 7,510 yards), teeing off on holes No. 1 and 10 at 8:00 a.m. each day.
Stanford, currently ranked 12th in Golfweek's/Sagarin rankings, will be joined in the field by No. 1 Texas, No. 3 Alabama, No. 4 USC, No. 5 UCLA, No. 10 California, No. 11 UNLV, No. 15 Texas A&M, along with squads from Arizona State, Duke, Florida, New Mexico State, Oklahoma State, TCU and Texas Tech.
Knowles Family Director of Golf Conrad Ray is expected to start a lineup consisting of (in order) Patrick Rodgers, Andrew Yun, David Chung, Cameron Wilson and Steve Kearney.
Rodgers has secured five top-10 finishes in six events this season and continues to lead the team in stroke average at 70.8. He is currently ranked No. 5 among the nation's top individuals, according to Golfweek.
Jordan Spieth and Dylan Frittelli of Texas, ranked No. 1 and 2 by Golfweek, along with No. 4 Justin Thomas of Alabama and No. 7 Julien Brun of TCU, are also expected to be entered in the field.
Oklahoma State won last year's event with a score of 863 (-1), while Cowboy Morgan Hoffman earned medalist honors with a 54-hole score of 206 (-10).