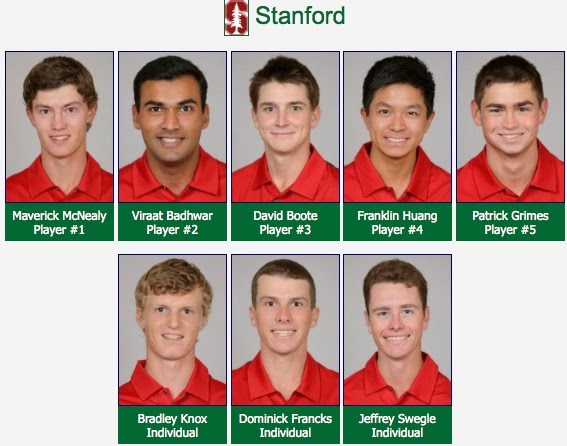 Stanford brought its young team, including two freshmen, two sophomore and a junior, to Mexico to compete in the Querencia Cabo Collegiate on a Tom Fazio designed course against 6 of the top 10 tanked teams in the country.  Arkansas and Houston are hosting the event that includes #2 Florida State, #3 LSU, #5 Wake Forest, #7 Baylor, #9 Vanderbilt, #10 Stanford, #15 South Florida and #22 Washington.

Final Results:
Although the final team result of 5th place was disappointing, the Stanford 5 all finished in the top 25 individually, something that has only happened twice in the past 8 years.  “Overall, the scoring was tough today with the course playing very firm and the breeze challenging,” Knowles Family Director of Men’s Golf Conrad Ray said. “We got off to a bit of a slow start. There were a few big numbers this week which kept us finishing higher, but it is the first time I can think of in a long time that everyone was in the top-25. We are still getting better with every event, and this team, although young, is starting to figure things out.”

Starting the day in 2nd place, a final day 10-over par 294 resulted in the Cardinal finishing in 5th place, 15 strokes behind Florida State and 4 behind 4th place Washington.  Only two teams in round 3 had a higher total than Stanford as all 5 players were over par for the day.  A very encouraging result, however, is that Viraat Badhwar finished tied for 8th and team depth emerged as the two freshmen, Franklin Huang and Jeff Swegle, were steady throughout as both finished in the top 25 individually.

Final round team and Stanford scorecards are shown below - click to enlarge.
Round 2 Results:
Despite windy conditions, Stanford posted the lowest 2nd round of 6-under par 278 to move into 2nd place overall, 1 stroke behind South Florida. Florida State is 2 behind Stanford and Washington 3 behind in what may end up being a 4 team race for the championship.  Steady play by all 5 Cardinal golfers led to the successful second round.


Team and individual scores for the top 9 teams is shown below - click to enlarge.
Round 1 Results:
Complete round 1 results are shown below including the Stanford scorecards (click to enlarge).  The Cardinal is tied for 3rd with Washington after a 2-under team total of 282 and trails Florida State by 7 and South Florida by 6 strokes.

Viraat Badhwar led the way with a strong 4-under 67 as he posted 4 birdies and the rest pars leaving him tied for 2nd overall.  David Boote was even par at 71 and tied for 18th and the two freshmen, Franklin Huang and Jeff Swegle, were 1 over at 73 and tied for 23rd. Franklin's roller-coaster round included 6 birdies and two double bogies while Jeff steady round included two bogies and 1 birdie.

Starting on hole 6, Maverick McNealy was rolling along at 4-under through 13 holes until disaster struck as he went double bogey, bogey, birdie before a 10 on the par 5 4th hole ruined an otherwise strong round.  Maverick ended with a 3-over 74 despite the closing difficulties.

Posted by Bob Stevens at 7:20 AM No comments: