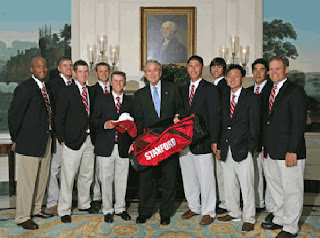 
The Cardinal squad won seven team titles in 2007 and captured its first national title since 1994 at the NCAA Championships in Williamsburg, Va. on June 2. The team led wire-to-wire at the championships, and claimed the program's eighth overall title. The Cardinal finished at 11 under 1,109 (275-278-275-281), at the par 70, 6,803 yard Golden Horseshoe Golf Club, to stake a 12-stroke victory. All five Cardinal golfers earned All-America honors, the most of any season in program history.
Posted by Bob Stevens at 10:11 AM No comments: