Head Coach Conrad Ray has signed two talented high school seniors to athletic scholarships for 2009-2010. Andre De Decker and Andrew Yun will join the Cardinal on the links next season. The official announcement about these outstanding players by Stanford is included below. 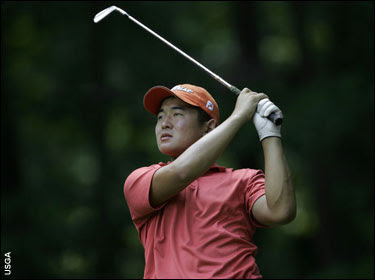 Andrew Yun, from Chandler Arizona, is a four time Junior All-American on the AJGA Tour. He finished 1st in the 2007 Arizona Amateur and 2nd in the 2007 Arizona Public Links Championships. In 2008 he finished 1st in the Verizon Junior Heritage, 6th in the Heather Farr Classic, 3rd in the Ping Invitational, and 5th in the stroke play portion of the US Junior Amateur, eventually losing in the quarterfinal round of match play.

"Andre and Andrew are fantastic additions to our squad. We are very happy that they have chosen Stanford and they will both leave their mark on our program over the next four years. Both share a wealth of competitive golf experience and I would not be surprised if both were able to come in and play a lot in their freshmen campaigns."

The pair will begin at Stanford in the fall of 2009, and help the Cardinal in its quest for the 2010 NCAA title. 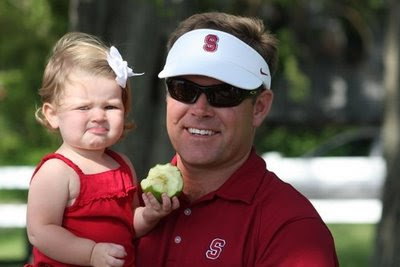 Stanford photo of Conrad Ray and his daughter Ella at the 2007 national championships where the Cardinal finished 2nd. 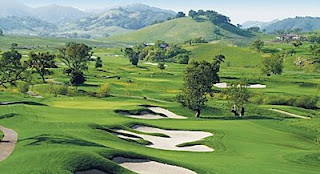 Stanford finished 2nd in the CordeValle Collegiate played in San Martin, CA, behind a dominant performance by USC which won the team title by 26 shots. Three Cardinal players finished in the top 10 individually with Sihwan Kim tying for 4th at 2-under par, Joseph Bramlett in 6th at even par and Jordan Cox tying for 10th at 2-over playing as an individual.

The unique format had each team including 6 players with the low 5 rounds each day counting towards the team score, instead of the typical event with 5 players on a squad. The four remaining Stanford players who counted for the team included David Chung at 11-over and the trio of players, Kemmer, Lim and Ziegler, all at 12-over.

Stanford's team will now be off until they return to action Feb 4th on the Big Island in Hawaii.

POSTED AFTER FIRST TWO ROUNDS:
After two rounds Stanford is in 2nd place but finds itself 19 strokes behind a red-hot USC team which has 3 players at the top of the individual leaderboard. Stanford is led by its two All-Americans, Sihwan Kim at 1-under and in 6th place and Joseph Bramlett tied for 7th at even par. An encouraging note is the play of junior Jordan Cox who is in 10th place at 1-over par, although he is playing as an individual so his scores don't count towards team play.

The weather has been on the cool side and the 2nd round was marked by gusty winds throughout the day making scoring conditions tough. The CordeValle course is showing its teeth given the conditions with the average scoring around 76 shots per round and the low round over the first two days was a 68. Only two other rounds were under 70, one being Sihwan Kim's first round 69 that tied him for the individual lead after day one.

In the second round the gusty winds led to erratic play by the entire field, including the Cardinal team. Cox's low team round of 70 included 7 birdies, 5 on the front nine when he made the turn at 3-under 33. Kim's round included a double bogey 7 on the par 5 third hold but he came back to close with an eagle on the par 5 18th hole over water. That 18th hole proved to be tough on two of the Cardinal players as Bramlett and Kemmer both finished with double bogies, in Bramlett's case that led to a still solid 1-over 73. Bramlett offset two double bogeys with five birdies.


The Stanford news service reports the following before the tourney began:

Playing for the Cardinal in the 54-hole three-day tournament will be Sihwan Kim, Joseph Bramlett, David Chung, Steve Ziegler, Daniel Lim, and Dodge Kemmer. Jordan Cox will also be competing as an individual. Kim was last year's CordeValle individual champion, and helped the team to a second place finish.

Four other Golfweek top 50 teams will be joining Stanford in the tournament: Arizona, No. 2 Arkansas, No. 36 Augusta State, Charlotte, Coastal Carolina, No. 18 Lamar, Northwestern, Santa Clara, UCLA, USC, and No. 9 Washington.

The Cardinal is paired with Lamar and Lim will be the first to tee off on the first hole at 8 a.m. to begin the tournament.

For more information about the CordeValle Golf Course, please visit http://cordevalle.com/golf.cfm.
Posted by Bob Stevens at 4:55 PM No comments: