The summer tournament season for Stanford's golf team members started well for Sihwan Kim in particular. Sihwan led all qualifiers for the US Public Links championship as he competed at Chino Hills #1 finishing with a two round total of 139. He will move onto the championship played at the Jimmie Austin OU Golf Club from July 13-18.

In addition, Sihwan, David Chung and incoming freshman Andrew Yun competed in the Northeast Amateur played in Rhode Island and Sihwan finished in 5th place with rounds of 65-70-68-67. 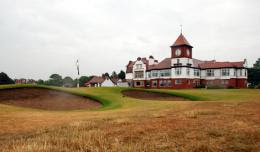 Complete results can be found at http://www.randa.org/championship/The_Amateur_Championship
Posted by Bob Stevens at 6:27 AM No comments:

Team and Individual Awards for the year

Conrad Ray, the Knowles Family Director of Men's Golf announced its year-end awards for the 2008-2009 season:

The Low Freshman Stroke Average goes to freshman David Chung with a 73.89 average - David was also selected to the All-Region team by the Golf Coaches of America.

The Stanford Tradition award, an award given to the player exhibiting leadership, strong work ethic, academic excellence, and an overall appreciation of the traditions of Stanford and Stanford men's golf, has been given to senior Daniel Lim.

Lastly, The "Spooney" Award, which is given to the Stanford golfer displaying the most fight and tenacity while maintaining a never give up attitude, was also awarded to senior Daniel Lim.

The Stanford men's golf program is proud of these team members and looks to build on this leadership in the future.