Stanford season ends in 21st place at the National Championship on the tough Concession course in Bradenton, FL

“I’m proud of the round our team posted today,” said Conrad Ray, Stanford’s Knowles Family Director of Men’s Golf. “The position we put ourselves in after day one turned out to be too difficult to overcome. Our guys need to be proud of their body of work from the entire year, and it’s unfortunate we didn’t have our best stuff this week.”


Team standings and third round scorecards are shown below:
That body of work featured two wins in the 2014-15 season, including a second straight Pac-12 Conference title. The Cardinal placed among the top 10 in 11 of 13 events. Even more, player of the year candidate Maverick McNealy tied the program’s second-best total with six single-season wins.

McNealy closed with three birdies in his final seven holes for a 2-under 70, the only red score posted by a Cardinal in three rounds. Appropriately, McNealy drained a 13-foot birdie putt on 18 to close the Pac-12 Player of the Year’s sophomore campaign.

Second Round Results - by GoStanford.com
Maverick McNealy’s even-par 72 led the Stanford men’s golf team Saturday in the second round of the NCAA Championships. Stanford’s 9-over 297 was 13 strokes better than its opening round at The Concession Golf Club, a par-72 track playing at 7,483 yards.

“We made progress today and played better, but still need to tighten up our games,” said Conrad Ray, Stanford’s Knowles Family Director of Men’s Golf. “It comes down to hitting our targets and being more comfortable on the greens.”

Team standings and 2nd round scorecards are shown below - click to enlarge
The top 15 teams after 54 holes of stroke play will advance to a fourth round of stroke play. Stanford faces a daunting challenge to move into the top 15 spots as it sits 13 strokes off that cut line.  After the fourth round, the top eight teams will head to match play to determine the team champion.

Starting on the back nine, McNealy bogeyed his first and seventh holes and did not fault again. He played his final 11 holes at 1-under for a score that was six shots better than his previous.

McNealy putted much better than his opening round and felt more comfortable reading the ever-challenging greens. His first shot of the day found water down the right side of the first fairway, but he recovered to save bogey.

Viraat Badhwar had three birdies during a round of 76, and Franklin Huang’s 3-over came with one bogey on the back nine.

Stanford received a 2-over from David Boote, highlighted by an eagle on the par-5 third. Boote buried a pitching wedge on the fly from 117 yards out, a shot that required a bit of surgery for the damaged cup.

“My lucky number must be 117,” Boote said after the round.

Jeffrey Swegle, who led Stanford in round one with a 2-over, was 6-over during his second circuit.

First Round Results - by Gostanford.com

Jeffrey Swegle was fearless in his NCAA Championships debut and led the Stanford men’s golf team with a 2-over-par 74 Friday at The Concession Golf Club.
Swegle was 2-under through three and 1-under at the turn, adding a birdie with two bogeys and a double bogey on the back nine. His three birdies led the team.
“I didn’t hit the ball that well, but did a great job of managing my ball around the course,” Swegle said. “A couple breaks went my way to help out. Last night, I went through my yardage book and mapped out the easiest ways to get into the fairway and onto the green. That navigation plan worked, since my ball-striking wasn’t at its best.”
Stanford shot a 22-over 310 to finish 29th in the opening round. The only team to shoot under par in the opening round, Illinois, took its place atop the leaderboard.  Fortunately there is a lot of golf remaining to be played to determine the low 8 teams that head into match play.
Individual scorecards for round 1 are shown below:
The Illini avoided big numbers on the 7,483-yard, par-72 course, recording just one double-bogey and adding 12 of their 16 birdies on the back nine, shooting 282 and finishing two strokes ahead of second-place Georgia.
Swegle’s classmate, Franklin Huang, was 7-over, including an eagle on the 545-yard, par-5 13th. Aiming at a gettable back pin, he flushed a perfect 56-degree wedge 10 feet past the hole and spun it back into the bucket.
Maverick McNealy could not find his momentum early in the round. He was 5-over through eight and finished at 6-over. McNealy’s only birdies came on the par-5 third and par-5 17th, the latter of which was earned after hitting on the ridge of a water hazard.
McNealy had the team’s longest stretch without a bogey at six straight holes (9-14).
Viraat Badhwar’s consecutive birdies on three and four put him at even. He would not manage another birdie after that point, completing with a 9-over 81.
David Boote saved his lone birdie for the par-5 17th during a round of 7-over.

Background by gostanford.com
• Stanford finished second in the NCAA Chapel Hill Regional, one of six sites used for the tournament proper. The Cardinal has won eight NCAA titles, the most recent in 2007. Last season, Stanford won the stroke-play portion of the tournament, led by individual winner Cameron Wilson, and finished third in match play.

• Conrad Ray, the Knowles Family Director of Men’s Golf, is taking his team to its eighth appearance in the NCAA Championships in 11 years at the helm.

• There will be 54 holes of stroke play competition, with the top eight teams advancing to match play

The Field
• This season’s field includes 30 teams and six individuals, including eighth-ranked Stanford.

The Course
• Named the “Best New Private Course of 2006” by Golf Digest, The Concession Golf Club was designed in honor of the 1969 Ryder Cup, where Jack Nicklaus conceded a putt to Tony Jacklin on the 18th green, resulting in the first-ever tie in the competition. The “concession” made by Nicklaus is considered one of the greatest acts of sportsmanship in history.

• Located near downtown Sarasota on a 520-acre site complete with wildlife, wetlands, native oaks, magnolia and pine, the course offers spectacular views. The Jack Nicklaus Signature Golf Course was designed in association with former British Open champion and fellow World Golf Hall of Famer Tony Jacklin. The course measures 7,474 yards from the back tees (there are five sets overall) and has the state’s highest slope rating by the USGA at 155.

• McNealy helped the Cardinal capture back-to-back Pac-12 Conference titles for the first time ever by shooting a Stanford-record tying 61 in the final round in Pullman, Washington, and was named Pac-12 Player of the Year. He was a finalist for the Ben Hogan Award.

• Junior David Boote tied for third in last year’s NCAA Championships.
Posted by Bob Stevens at 11:22 AM No comments: 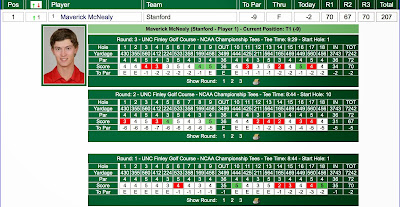