Pac-10 championship being played at the Seattle Golf Club

The Pac-10 Championship is underway in Seattle, being played at the historic, private Seattle Golf Club. The host Washington team is coming off a record-breaking performance at Stanford in the US Intercollegiate where they swept the top three individual places and won the team title easily in record fashion.

Stanford sends it's nationally ranked team (5th) into this competition in which each team sends six players instead of the typical five players competing. Playing competitors are Steve Ziegler, David Chung, Sihwan Kim, Dodge Kemmer, Daniel Lim and Graham Brockington. Injured All-American, Joseph Bramlett, has just started to play again and may be available for the NCAA regionals May 14-16.

Washington's strong 3rd round included rounds of 65, 67 and 68 providing the difference with the rest of the field, although Oregon is making a strong showing in 2nd place after a third round 350. Surprisingly, 2nd ranked nationally USC is at 31-over par, 15-shots behind Stanford and 39 strokes behind Washington.

DAY ONE RESULTS (report from Stanford's gostanford.com website:
No. 4 Stanford completed two rounds of play today at the 2009 Pac-10 Championships at 6,836-yard, par-72 Seattle Golf Club, shooting a cumulative 17-over-par 737 over 36 holes to settle into a tie for fourth place.

The Cardinal have two more rounds over the next two days to catch the top of the field, led by hosts No. 5 Washington, which leads by four strokes with a plus-five 725.

Senior No., 93 Dodge Kemmer had the best outing for Stanford on the day, shooting a three-over-par 147 to rest in a tie for 18th place. Senior Daniel Lim and freshman No. 46 David Chung followed close behind, as each posted a four-over-par 148. Lim knocked in six birdies, four of which were on the back-nine, in the first round to post a two-under-par 70. Chung sunk an eagle on the par-five 14th hole and birdied twice in the first round on his way to an even-72.

Sophomores Sihwan Kim and No. 9 Steve Ziegler recorded the two next best scores for the Cardinal. Kim did not start out like he had hoped to, but bounced back in the second round with a three-under-par 69 to give him a five-over-par 149 for the day. Ziegler was consistent through his two rounds, carding a 76-75 to put him at seven-over and in a tie for 35th place. Sophomore Graham Brockington finished the day at eight-over-par.

Stanford is paired with California for tomorrow's third round, and will be teeing off from the first hole at 8 a.m. Live scoring can be found at http://www.golfstatresults.com/public/leaderboards/team/static/team_players_1479.html.
Posted by Bob Stevens at 8:27 AM 1 comment:

Steve Ziegler named to the Palmer Cup representing the US 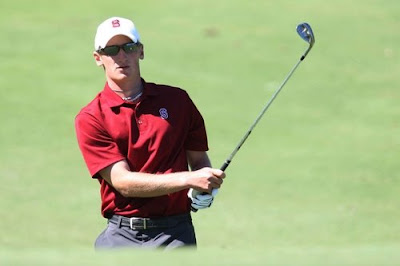 Stanford's super-soph Steve Ziegler has been chosen to the Palmer Cup as one of eight collegians who will represent the US in Ryder Cup-style matches versus a European team. The matches will be played June 3-5 at Cherry Hills Country Club in Denver and with Steve being from Colorado it will be a homecoming of sorts for him. The full press release from the Golf Coaches Association of America is included below:

NORMAN, Okla. – The United States and European teams have been announced for the Palmer Cup presented by Fisher Capital Partners at Cherry Hills Country Club in Denver. The annual Ryder Cup-style competition will be played June 3-5.

Representing the Euros will be Jorge Campillo of Indiana, Arizona State’s Stephan Gross, Leonardo Motta of IULM Milan, Augusta State’s Henrik Norlander, Chris Paisley and Robin Wingardh of Tennessee, Texas A&M’s Andrea Pavan and Tim Sluiter of Southern California. Spain’s Campillo will be competing in his third Palmer Cup (2007, ‘08) will Sluiter of The Netherlands will appear in his second (2008). Gross is the first Palmer Cup participant from Germany. Motta and Pavan hail from Italy, Paisley from England and Norlander and Wingardh from Sweden.

Andrew Yun, who will be coming to Stanford for the 2009-10 season, won his second Arizona Champions Stroke Play title at the TPC Scottsdale Champions Course by 8 strokes. Andrew, who is 17, was the only player in the field to finish under par as he finished at 4-under par 276, with rounds of 69-70-72-65.

A recap of the tournament can be found at http://www.azgolf.org/main/index.asp?CategoryID=0.
Posted by Bob Stevens at 7:55 AM No comments:

The Cardinal hosted a top field for the US Intercollegiate played on the outstanding Stanford golf course. Among the top 25 teams in the country are USC (3), Stanford (5), Washington (9), Texas (18) and ASU (22) while UCLA (27) and Cal (30) are not far behind.

FINAL DAY RESULTS:
Washington continued it's scorching play to win Stanford's event by 15 shots at 36-under par on a perfect day for scoring as temperatures reached into the high eighties were combined with low wind. In a highly unusual outcome, three Washington players led by Nick Taylor swept the top three individual places at 12-under, 11-under and 10-under as both Taylor and teammate Darren Wallace fired final round 63s.

It was clear throughout this year's event that the Stanford course lacked the teeth to challenge the field as the rough was thin throughout making it easy to reach the greens, and the firm fairways led to unusually long drives. Also, the greens, although firm, were not as fast as in recent years so the number of three-putts was down. The combination led to the record scoring throughout the field as a total of 81 rounds in the 60s were shot, and with a total of six players shooting all three rounds in the 60s, something that has rarely occurred in the past. There were three rounds of 63 shot, one 64, four 65s and eight 66s.

The total team and individual scoring also were record lows. Last year's tournament was won with a total score that was 24 shots higher. Stanford in 2008 finished 2nd at 1 over par, or 12 shots higher than in this year. Complete scoring from GolfStat can be found here.

DAY ONE RESULTS:
Day one ended with record low scoring in ideal conditions. Winds were light and temperatures reached the high 70s by mid-afternoon, while the rough was not as tough as in recent years. The combination led to numerous sub-70 rounds as Washington's team took an 8-shot lead at 23-under par heading into the final round with their team members carding 7 rounds in the 60s, led by Tze Huang Choo's 10-under 130 and rounds of 65-65.

Stanford found itself in 5th place at 9-under led by Steve Ziegler's 6-under 68-66 start putting him in 3rd place overall. Next came Dodge Kemmer's 2-under 67-71, David Chung's 68-73, Sihwan Kim's 69-72 and Daniel Lim's 74-70. Playing as individuals Graham Brockington opened with a fine 67 followed by a 75 while Jordan Cox had rounds of 74-69. Freshman Wilson Bowen is redshirting and did not play.

Coach Ray invites the Stanford golf community to come out and enjoy the great play on our wonderful golf course! Here's an audio interview Conrad had with the Bay Area's flagship sports talk station, KNBR --- http://www.knbr.com/common/global_audio/201/6468.mp3.
Posted by Bob Stevens at 7:17 AM No comments:

The Cardinal finished in 2nd, two shots behind Clemson, in the prestigious US Collegiate Championship played at the Golf Club of Geogria. Stanford led by 4 shots after two days against the very strong field by 4 shots after two days of play. This 2nd place finish against a field which had 8 of the nation's top 10 teams (including Pac 10 rivals UCLA and USC), solidifies Stanford's top 5 ranking despite playing without their injured All-American Joseph Bramlett.

In round two, Chung's spectacular 66, easily the best of the day and the 2nd lowest round of the tournament behind Erik Flores' 65 in round 1, included 7 birdies and one bogey. David ended up two shots behind the tournament's individual champion to continue his outstanding freshman season.

It's fitting that Georgia is location of the US Collegiate a week before the Masters starts as the nation's best teams gathered at a top venue, the Golf Club of Georgia. Hosted by Georgia Tech and including 8 of the top 10 teams in the current national rankings, the golf course is expected to provide a strong test for the best players in college.

Posted by Bob Stevens at 7:18 AM No comments: