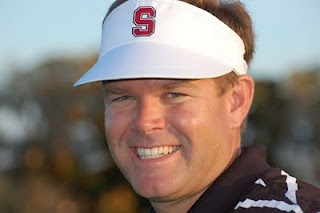 Today's episode is an interview with Stanford men's coach Conrad Ray , whose Cardinal squad ranks second in the Golf World/Nike Golf coaches' poll. After winning its spring opener in Maui earlier this month, the team heads south this week to North Ranch CC in Westlake Village, Calif., where it will attempt to defend its title at the USC Invitational.

Quick note, as you'll learn when you listen to the podcast: senior Joseph Bramlett will be playing in his first tournament of the 2009-10 season for Stanford.
Posted by Bob Stevens at 6:48 AM No comments:

FINAL RESULTS - Stanford continued its solid play from the fall season to win its second tournament in a row by 3 shots over two Pac-10 teams, Oregon and Washington. After day two, the Cardinal was 2 strokes behind Washington with a number of teams in the hunt including top-ranked Oklahoma State. A solid 2-under final round proved the difference.

Birdies on their final holes by Sihwan Kim, Steve Ziegler and Andrew Yun secured the Cardinal the Amer Ari Invitational championship on the Mauna Lani North Course in Waikoloa, Hawaii. Stanford, Oregon and Washington were tied as they players headed for their final holes. With the birdies, the Cardinal turned in a 866 for the team title.

Stanford was led by junior All-American Sihwan Kim who finished tied for 4th on rounds of 72-70-71. Sophomore David Chung came back strong after a disappointing first round to finish tied for 16th shooting 79-68-71, followed by senior Jordan Cox who tied for 29th on rounds of 73-72-76. Next came freshman Andrew Yun who also tied for 29th finishing strong with rounds of 75-75-71, followed by junior All-American Steve Ziegler who tied for 44th shooting 77-73-73.

In a good Stanford Daily recap of the event Conrad added some comments: “It’s really exciting to win in a field with 10 teams ranked in the national top 25,” said head coach Conrad Ray. “We put in a lot of hard work in the offseason to be able to come out strong and put on a show.”

No. 5 junior Sihwan Kim led the Cardinal to victory, posting consistent scores of 72, 70 and 71 to come out with an overall three-under 213. Kim finished the tournament in a tie for fourth individually in a tight competition for the individual crown. Kim was only four strokes behind tournament winner Buddy Hudson of Texas, who posted a six-under final round score to seize the tournament individual title.

“This finish was really great for Sihwan,” Ray said. “He has been putting really well and is using a really positive mental approach that has been helping his game. He definitely led us the whole way through the tournament.”
“Sihwan was a little frustrated during the closing round,” Ray continued. “He hit a ball out of bounds on the 16th coming down the final stretch, but he birdied on the 18th to make up for it. He knew he had a good chance to win in that field, but regardless, every day he is getting better, and this should be a really exciting season for him.”

The spectacular Mauna Lani Resort on the Big Island of Hawaii is the site of the University of Hawaii at Hilo Invitational. The tournament website provided an overview and daily updates of the event.

SECOND DAY RESULTS - Stanford moved into 2nd place. From the UH-Hilo website: The University of Washington used a 1-under 287 to take the second round lead of the Amer Ari Invitational on the Mauna Lani North Course in Waikoloa, Hawaii.

Oklahoma State’s Kevin Tway took the second round lead by firing a 4-under 68 in today’s round to take a one-stroke lead over first-round co-leader Nick Taylor of Washington. Tway’s 4-under, 140 leads five players under par for the tournament. Taylor is at 3-under 141 (70-71) followed by Stanford’s Sihwan Kim (142=72-70) and Texas’ Bobby Hudson and UCLA Gregor Main at 1-under 143.

FIRST DAY RESULTS - Stanford finished the day in 6th place. From the UH Hilo website: As the wind picked up, so did the scores as UCLA was the only team to come in at even-par in the Amer Ari Invitational on the Mauna Lani North Course in Waikoloa, Hawaii.

Calm winds turned gusty as the day progressed creating more challenges for the competitors. At the end of the day only six players finished under par. Tied for top honors at 2-under-par 70 are Texas Tech’s Nils Floren, Texas’ Bobby Hudson, UCLA’s Alex Kim, Washington’s Nick Taylor and Oregon’s Andrew Vijarro. In sixth place at 1-under is Colorado’s Kevin Kring. Five players are tied in 7th place at even-par 72.

For the first time in the tournament's history, GolfStats will be providing live-scoring with 3-hole scoring for each player being posted on their tournament website.
GolfStat.