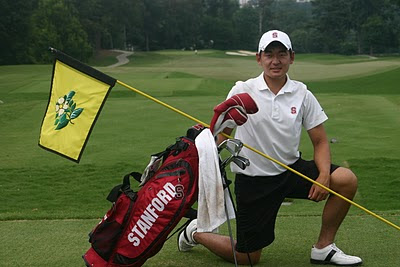 Stanford rising sophomore Andrew Yun wins the Dogwood Invitational at 20-under par with rounds of 66-62-71-69.  His 2nd round 62 tied the course record.  Rising senior Sihwan Kim tied for 5th 6 shots back with rounds of 68-68-67-71.
The tournament website reports:
The 2010 Dogwood Invitational came down to the 72nd hole to determine its' Champion.  Andrew Yun of Stanford University hit his approach shot to the par 5 18th at Druid Hills Golf Club to 3 feet for birdie to win by one shot at 20 under par.  Atlanta's Anders Albertson, who will be a Freshman at Georgia Tech in January fired a 69 on the final day but it was one shot short.  The tournament turned into a final day "match play" finish between the two with the turning point being Yun's chip-in eagle on the par 5 fourteenth.  When Albertson bogied the 235 yard par 3 seventeenth, the event was all square at 19 under and a playoff seemed likely.  Albertson's long birdie putt on 18 just missed, leaving Yun with a tap in win to close out the championship.  See complete tournament coverage.
Posted by Bob Stevens at 9:13 AM