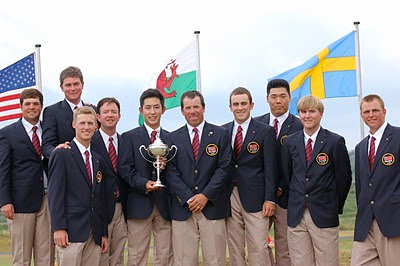 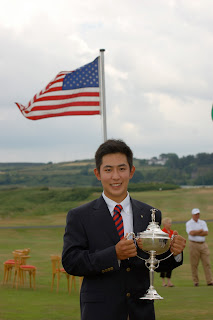 A total of 7 Stanford golfers are competing in events at the same time.  David Chung won all four of his matches in the Palmer Cup leading the US team to victory or European collegians in Royal Portrush Golf Club in Northern Ireland while 6 Cardinal golfers led by a win by recent grad Joseph Bramlett competed in the Northeastern Amateur in Rhode Island.

The Palmer Cup was played at Royal Portrush GC in Northern Ireland between European and American collegiate golfers.  All the results can be found at http://www.palmercup.org/.

America downs Europe 13-11
PORTRUSH – The United States defeated Europe, 13-11, to claim the Palmer Cup held at Royal Portrush Golf Club. The victory was the Americans first in Europe since 2002 and gives the USA a 7-6-1 overall advantage in the Palmer Cup series.

Each side claimed four matches in final day singles action. Daniel Miernicki and David Chung posted the first two victories of the day for the Americans when they defeated James Byrne and Henrik Norlander, respectively. Miernicki claimed the first hole in his 5 and 3 win and never trailed. Chung holed in from the fairway for eagle on the first hole of his match but Norlander would respond with an eagle of his own at the par 5 second. Chung would reclaim the lead after No. 4 before cruising to a 4 and 2 victory. Chung was the only player to post a 4-0 record at this year’s Palmer Cup. It was just the 12th unbeaten and undefeated performance in the 14-year history of the Palmer Cup. 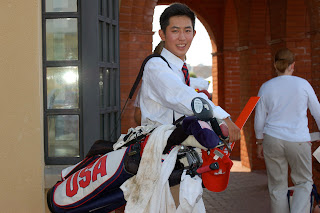 Prior Round Story: PORTRUSH, Norhern Ireland - Stanford junior David Chung won both of his matches on Thursday to help the United States to a 6-2 lead over Europe after the first day of the Palmer Cup being contested at Royal Portrush Golf Club in Northern Ireland.
Chung partnered with Jonathan Randolph to defeat David Lingmerth and Patrick Spraggs, 1-up in the four-ball matche and defeated the same European pair in the afternoon foursome match.
Chung and Randolph won the first hole with birdie and led throughout. The two teams halved the next two holes before the U.S. won No. 4 by concession and the fifth and sixth with birdie to move to 4-up. Chung and Randolph moved the lead to five after eight holes. Europe would trim the lead to 3-down after No. 11, but the Americans won Nos. 13 and 14 to close out the match.
"They did great," said United States Head Coach Chris Zambri. "As it turns out we lost the first two matches of the event and we've won since then. I'm proud of my guys. I'm proud of Jonathan (Randolph) and David (Chung) for winning two matches and winning convincingly. I'm also proud of the guys who had close matches that could have gone either way and luckily for us they went our way. That's the real sign of a champion, to win a close match. Their whole lives they will be playing in close matches and they'll have to play important rounds and it's great to see them step up when they need to."
Chung will face Europe's Rhys Enochs in Friday's singles competition.
Friday's round will consist of singles matches and begin at 10 a.m.
Palmer Cup
Royal Portrush Golf Club
United States 6, Europe 2
Posted by Bob Stevens at 7:28 AM