Stanford competes in the NCAA Championship in Arkansas 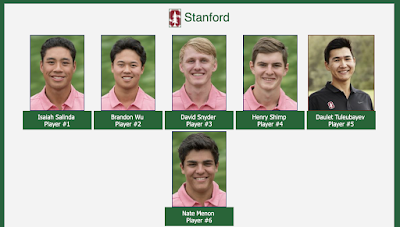 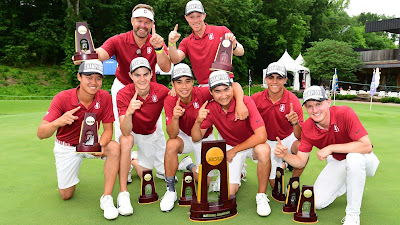 "I'm just so proud of these guys," said Ray. "We battled all week. It is the longest week in golf and to play that fine Texas team and do what we did today, I can't say enough about my guys."

First-year assistant coach Matt Bortis competed for Arkansas for three years and the Blessings Golf Club was his home course. He transferred – wait for it – to Texas and played for the Longhorns his senior season.

The Cardinal utilized his home course knowledge to full advantage.

"I give a ton of credit to Coach Bortis," said Shimp, who clinched the title on 17 with a 2 and 1 victory against Spencer Soosman in the leadoff spot. "He does a great job of keeping me calm out there. I just stayed confident and tried to hit good shots."

The win was especially satisfying for seniors Salinda and Wu, who competed for Stanford for the last time. Both went 3-0 in match play.

"I couldn't think of a better way to end," said Salinda.

Added Wu, "It's crazy. You can't script a better ending to your career. This whole week we knew that every round could be our last so to end up on a high note is great."

"It is unbelievable," said Shimp, who rebounded from a 2-down deficit. "To win with this group of guys is so cool. Two of my teammates who weren't even on the trip (Chris Meyersand Ethan Ng) flew in last night and bought their own tickets. It's amazing to do it with your teammates like this."

The team relished its underdog role and it provided added incentive.

"Once you get here, you have to think you have a chance," Salinda said. "Once we made match play, I thought we could win. It was pretty cool."

Ray thinks this team has worked harder than any team he has coached, on and off the course. The effort paid off big, along with the steady play of Salinda and Wu.

"They were rock solid all year, so we lean on them a lot," he said. "They left a strong legacy of leadership. I'm happy they could end their career like this because they are a huge part of our success."

ROUND FOUR RESULTS: Stanford advances to match play as the 6th seed
For full round details go to https://gostanford.com/news/2019/5/27/mens-golf-match-play-secured.aspx.

For the third time in 11 years, the Stanford men's golf team has advanced to match play in the NCAA Championships. Weathering a shaky front nine on Monday at demanding Blessings Golf Club, the No. 12 Cardinal steadied on the final nine and finished sixth in the 30-team field. Sixth-seeded Stanford will face No. 3 seed Wake Forest in the quarterfinals on Tuesday at 5 a.m. PT. "Really proud of the guys," said Knowles Family Director of Men's Golf Conrad Ray. "Any time you get a chance to play match play at the national championship, you're happy. Our guys ground it out."

ROUND THREE RESULTS: Cardinal are tied for 2nd headed into final round
For full round details go to https://gostanford.com/news/2019/5/26/mens-golf-moving-on.aspx.

"It was tough out there early," Said Conrad Ray, The Knowles Family Director of Men's Golf. "We had a short night with the tornado drill, and it took the guys a little while to get their bearings and lock and load. We could have played better. My experience is there's always going to be one day you have to weather the storm and I think we just had that day."

After avoiding a big mistakes the first two days, Salinda made two double bogeys on the back nine and finished with a 74. He is tied for fifth at 2-under. "I made a few bad swings, but that's going to happen on this golf course," he said.
"Henry is hitting it great and really manages himself well," said Ray. "He could have made a few more putts. Give coach (Matt) Bortis credit for walking with him today."

"One step at a time," Ray said. "Tomorrow is a new day and I think our guys will be ready for it." Ray will confer with Bortis to determine his lineup. "We've hung our hat all year on depth, so we decided to stick Nate in there and see if that would add a little bit of spark and if he could manage the course," said Ray. "What we preach all year is that this is a team game and when your sixth man can beat the other team's sixth man, you've got something good. We'll figure it out, but it was nice to see Nate answer the call."


ROUND TWO RESULTS:  Solid 2nd round keeps Stanford in 2nd place
For full round details go to https://gostanford.com/news/2019/5/25/mens-golf-standing-tall-in-the-ozarks.aspx.

"Any time you can get around this course in under par as a team, you've done well," said Conrad Ray, the Knowles Family Director of Men's Golf. "The guys got off to a solid start and we just kind of hung in there. Great contribution by Henry Shimp going under par and Daulet Tuleubayev was great from the get-go."

"We've kind of told the guys all year that we're trying to have five No. 1's," Ray said. "All of those guys can step up at any time and play well and you saw that today. Everyone is in a good spot; now the goal is to get some rest. That's a heckuva hike."

"We know it's a long week," said Ray. "But if you can improve your position every day – and hats off to Oklahoma State, that's a great round. We're excited to see what happens tomorrow."

ROUND ONE RESULTS: Strong Start led by Isaiah Salinda has Cardinal tied for 2nd
For full round one details including videos and quotes go to https://gostanford.com/news/2019/5/24/mens-golf-strong-start.aspx.

"The guys did a nice job and really hung in there," said Conrad Ray, the Knowles Family Director of Men's Golf. "We knew it would be a challenge and it was."