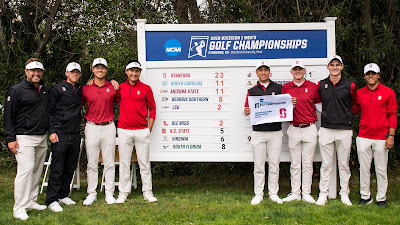 Leading wire-to-wire, No. 12 Stanford made the most of its home course advantage by winning the NCAA Stanford Regional on Wednesday at rainy Stanford Golf Course.

The victory was the fourth in a row by clicking second-seeded Cardinal, securing a spot in the NCAA Championships, May 24-29, at Blessings Golf Club in Fayetteville, Arkansas. It will be Stanford's 12th trip in the last 15 years.

The last time the Cardinal won four-consecutive tournaments was in 2013-14. Coming into the regional, the Cardinal prevailed at The Goodwin, the Western Intercollegiate and Pac-12 Championships.

In its last four start, the Cardinal is an accumulative 48-under.

"We're happy that we picked up our fourth win a row and we just want to keep this momentum going," said Conrad Ray, the Knowles Family Director of Men's Golf. "Now anything is possible when you get a ticket to the big show."

Stanford started the final round with a 10-stroke advantage, but Ray knew it wouldn't be easy.

"You do this long enough and you see crazy stuff happen," he said. "North Carolina got off to a hot start. But our guys hung in there and they kept fighting. All year we've played well on the back nine."

Arizona State and North Carolina tied for second at 11-under 829, while Georgia Southern claimed fourth and LSU placed fifth. All advance to the NCAA Championships.

In all, 30 teams and six individuals from six regional sites qualified for the NCAA Championships.

Cardinal senior Isaiah Salinda, competing on his home course for the last time, earned medalist honors for the second time in a month. He shot rounds of 67-68-68 to conclude at 10-under 200. Salinda scored his first victory collegiate triumph last month at the Western Intercollegiate.

Salinda broke a three-way with back-to-back birdies at the par-4 15th and par-5 16th holes. He made an eight-footer at 15, then flushed a 221-yard 4-iron on the green with his second shot at 16 and nearly made the 12-foot eagle putt.

"It was kind of tough day with the conditions and I knew it wouldn't be easy," he said. "To finish strong like that feels really good."

Salinda snapped a three-way tie with back-to-back birdies at the par-4 15th and par-5 16th holes. He made an eight-footer at 15, then flushed a 221-yard 4-iron on the green with his second shot at 16 and just missed a 12-foot eagle putt.

"I didn't do any one thing particularly great," said Salinda. "Everything was really solid. I drove it well and when I was out of position, I was able to save pars and keep the momentum going."

Junior David Snyder secured his third top-10 in his last four starts by tying for second, posting scores of 67-68-68 to finish at 7-under 203. He was runner-up at The Goodwin in late March.

Senior Brandon Wu continued his stellar play and tied for sixth. He shot rounds of 68-67-69 to wind up at 6-under 204 and has finished in the top-10 in five-of-his-last-six starts and hasn't finished lower than 11th.

Junior Henry Shimp recorded his best round of the week with a 68 and shared 43rd with freshman Daulet Tuleubayev (74) at 6-over 216.
ROUND TWO RESULTS:  Stanford stretches its lead to 10 strokes
No. 12 Stanford increased its lead Tuesday after two rounds of the NCAA Stanford Regional at cool and cloudy Stanford Golf Course. Taking full advantage on its home track, the second-seeded Cardinal combined for a 9-under-par score of 271 and has 36-hole total of 15-under 545. No. 3-ranked and top-seed Arizona State and No. 26 and fifth-seed North Carolina share second at 5-under 555. "These guys have really been focused on looking ahead all spring," said Conrad Ray, the Knowles Family Director of Men's Golf. "That was the message we were trying to send today is to get to 20-under par and see if that's good enough to win. The greens were a little bit faster and the north breeze was tough, but I thought our guys did a good job."Thirteen teams and 10 individuals are participating in the 54-hole regional. At the conclusion of play Wednesday, the top five teams and leading individual not a member of an advancing team qualify for the NCAA Championships, May 24-29 at Blessings Golf Club in Fayetteville, Arkansas.There are five teams under par.Stanford begins play Wednesday at 8 a.m. on the first tee with Arizona State and North Carolina. Once again, the Cardinal received strong contributions throughout the lineup. Senior Isaiah Salinda followed up Monday's 4-under 66 with a 67 and holds the individual lead at 7-under 133. He has bettered par in five-straight rounds.Teammates Brandon Wu (68-67) and David Snyder (67-68) are tied for second and two shots back at 5-under 135. Salinda made three birdies during his bogey-free round and closed with nine-consecutive pars. Wu tallied four birdies and played his last 13 holes in 3-under, while Snyder finished strong with birdies at 15, 16 and 18. Snyder has recorded a squad-best 11 birdies in two rounds. Teeing off first, freshman Daulet Tuleubayev gave Stanford a nice lift with a 1-under 69 and birdied two-of-his-last six holes. He's tied for 29th at 2-over 142, while junior Henry Shimpis tied for 62nd at 148. For the second-straight day, three-of-five Stanford players birdied the par-5 first hole. Ray said the goal Wednesday is to "win the day." The dry conditions could change, as the forecast calls for light rain. The Cardinal will seek its fourth-consecutive team victory, previously winning The Goodwin, Western Intercollegiate and Pac-12 Championships. The last time Stanford won four-in-a-row was in 2013-14, when it claimed The Goodwin, Western Intercollegiate, Pac-12 Championships and NCAA Regional. Fans are welcome to attend and there is no admission charge.