FINAL RESULTS: ANOTHER DOUBLE-DIP - Salinda, Cardinal victorious at Pasatiempo
For the first time since 2016, the Stanford men's golf team has produced back-to-back victories. After pulling away for an 18-stroke win two weeks ago on its home course at The Goodwin, the No. 21 Cardinal followed up with a six-shot triumph on Wednesday in the 73rd Western Intercollegiate at Pasatiempo Golf Club. Stanford has recorded 10 team triumphs in the Western dating back to 1947. Additionally, senior Isaiah Salinda captured his first collegiate crown, becoming the eighth Cardinal medalist at Pasatiempo. He birdied the par-3 18th hole in regulation to force a sudden death playoff with Sean Yu of host San Jose State, then beat him on the fifth playoff hole by sinking a six-foot birdie putt on the 18th green. Cardinal senior Brandon Wu claimed his first college title at The Goodwin. "Our team definitely made their share of birdies the last two days," Knowles Family Director of Men's Golf Conrad Ray said. "This team just keeps plodding along and I'm really proud of them. Everybody stepped up and made some great shots when it mattered." Ray was thrilled for Salinda, who won the Pacific Coast Amateur Championship and reached the semifinals of the U.S. Amateur at Pebble Beach last summer. "He's had a great career at Stanford and it's special for him," Ray said. "Especially coming at this time of the year." Stanford caught fire the last two rounds in the 13-team tournament on the famed Alistair MacKenzie layout. For the second day in a row, it boasted the low team total, combining for a 10-under 340 to finish at 10-under 1,040 for the three-day event. Cal claimed second at 1,046. Salinda began the final round with a three-stroke advantage and maintained it until the back nine. After falling two shots off the pace, he birdied 15 and 16 to regain a share of the lead, bogeyed 17, then stiffed his tee shot at the short but testy par-3 18th, where he calmly holed a testy, four-foot, right-to-left birdie putt. Wu erupted for eight, last-da
y birdies and fired a 65. He was one of three Stanford players to break par. Junior David Snyder also caught fire on the back side with five birdies and fashioned a 66, while junior Henry Shimp added a 68. Freshman Daulet Tulebayev contributed a 71 and sophomore Nate Menon shot 73. Wu and Shimp concluded a 1-under 209 and tied for 11th, Snyder wound up at 2-over 212 and knotted for 17th, Tuleubayev wound up at 4-over 214 and tied for 24th, and Menon finished at 218 and tied for 47th.    Playing as individuals, freshman Freddie Lee closed with a 69 and tied for 17th, and freshman Ethan Ng added a 70 to share 47th. Stanford resumes competition next Monday through Wednesday at the Pac-12 Championships at Eugene Country Club in Eugene, Ore.

FINAL TEAM AND STANFORD SCORING - CLICK ON IMAGE TO ENLARGE

ROUND TWO RESULTS: Salinda on top as Stanford moves into second place 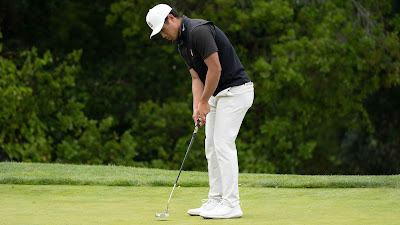 Stanford mounted a back nine charge and pulled within one stroke of the lead on Tuesday after two rounds of the 73rd Western Intercollegiate at Pasatiempo Golf Club. The only team to break par in the 13-school tournament, the No. 21 Cardinal compiled a score of 4-under 346 and stands at even-par 700 after 36 holes. Host San Jose State retained the top-spot at 1-under 699. USC and Cal share third at 705. Stanford senior Isaiah Salinda, who began the second round in a three-way tie for first place, earned sole possession with a 2-under 68. Coupled with Monday's career-best 64, he has a 36-hole score of 8-under 132, three strokes ahead of Kevin Velo and Sean Yu of San Jose State, Clay Feagler of Pepperdine and Cameron Henry of USC. "I definitely thought it was a little tougher than yesterday," said Salinda, citing the firm conditions and challenging pin locations. "I kind of had to work for everything." Salinda capped off his day with clutch birdies at 17 and 18. Juniors Henry Shimp (67) and David Snyder (69) also broke par for the Cardinal, while freshman Daulet Tulebayev shot 70. Senior Brandon Wu added a 74. Playing as individuals, freshmen Freddie Lee and Ethan Ng record 74 and 76, respectively. The Cardinal, coming off an impressive 18-shot victory at The Goodwin in its last start, has produced nine wins at the Western Intercollegiate, the last in 2014. Seven Stanford golfers have collected individual titles, Maverick McNealy last accomplishing it in 2016. "At the end of the day, the team win is the most important thing to me," said Salinda, who will seek his first collegiate victory. Stanford begins the final round on Wednesday at 9:42 a.m. and is paired with San Jose State, USC and Cal. Golf Channel will provide live coverage from 1-4 p.m.

ROUND ONE RESULTS: Salinda fires a career low 64 to tie for lead
Led by a brilliant, career low 64 by Isaiah Salinda, Stanford is tied for 5th overall in the team competitions, 8
strokes behind the host San Jose State.  Salinda's 64, which included six birdies and no bogies,  leaves him tied for 1st individually with two other players.  Brandon Wu, coming off his first career victory at the Goodwin, posted a solid even par 70.

Henry Shimp, despite a triple bogey 7 on his first hole, played even par thereafter to post a 73 which equaled freshman Daulet Tuleubayev's total.  Coming in at 4-over 74 was Nate Menon and David Snyder finished with an opening 77.

Playing as individuals, freshman Freddie Lee fired a 1-under par 69 and is tied for 9th while another freshman, Ethan Ng shot a 2-over par 72 to sit tied for 31st.


Full scorecards for Stanford are shown below as is the team finishes for round one - click on the image to enlarge.
BACKGROUND
Fresh off its first team victory of the season, the No. 21 Stanford men's golf team will compete in the 73rd Western Intercollegiate hosted by San Jose State, Monday through Wednesday at acclaimed Pasatiempo Golf Club in Santa Cruz, Calif. It marks the final regular-season event before the Pac-12 Championships. All three rounds will be televised live by the Golf Channel. The Cardinal is coming off an 18-stroke victory at The Goodwin two weeks ago at Stanford Golf Course. Senior Brandon Wu won his first collegiate title, edging junior teammate David Snyder on the first hole of a sudden-death playoff. Snyder forced extra holes by draining a 40-foot birdie putt on the final hole of regulation. 73rd Western IntercollegiateMonday-Wednesday, April 15-17Pasatiempo Golf Club • Santa Cruz, Calif.6,615 yards • Par-70 The Tournament• Since the tournament's inception in 1947, Stanford has produced nine team titles (2014, 1996, 1962, 1955, 1954, 1953, 1952, 1951 and 1947) and seven individual champions in Maverick McNealy (2016), Patrick Rodgers (2012), Cameron Wilson (2014), Rob Grube (2006), Joel Kribel (1999), Chuck Van Linge (1954) and Fred Brown (1952).    The Coverage • Live results will be available throughout the event at GoStanford.com, with updates available on Twitter (@StanfordMgolf), Facebook (StanfordMgolf) and Instagram (@StanfordMgolf).• Golf Channel: Monday and Tuesday, 4-7 p.m. and Wednesday, 1-4 p.m.The Field• The 13-team field is comprised of No. 8 USC, No. 10 Cal, No. 14 Pepperdine, Stanford 21, No. 39 Oregon, No. 45 Arizona, No. 48 Colorado State, No. 61 San Jose State, No. 64 San Diego State, No. 72 Washington, Hawaii, UC Irvine and UTEP.           The Format • The event will span three days and features 54 holes of stroke play. Each team will count the best five-of-six scores each day.    The Forecast • There is a 90 percent chance of rain on Monday with a high temperature of 60 degrees. On Tuesday, it will be party cloudy with a high of 65, and on Wednesday it will be sunny with a high of 69. Cardinal Contingent • Stanford will be represented by Brandon Wu, Henry Shimp, David Snyder, Daulet Tuleubayev, Isaiah Salinda and Nate Menon. Ethan Ng and Freddie Lee will compete as individuals.The Course Designed by world-renowned golf course architect Alister MacKenzie in 1929, tree-lined Pasatiempo has hosted the 1986 U.S. Women's Amateur and 2004 U.S. Senior Women's Amateur. It features undulating greens, ocean views and will test every club in your bag.
Posted by Bob Stevens at 7:43 AM