FINAL RESULTS
The Stanford golf team pulled away for a resounding 18-stroke victory on Saturday in the 50th playing of The Goodwin at Stanford Golf Course. The Cardinal closed with a 6-under score of 274 – the lowest last-day total among 26 competing teams by six strokes – to finish at 8-under 832. No. 7 USC placed second at 850 and No. 4 Oklahoma was third at 854. It marked the 16th Cardinal victory in tournament history, named for former head coach and Stanford Hall of Famer, Wally Goodwin. He was unable to attend, but no doubt the 92-year-old Goodwin had a big smile on his face Saturday night at his home in Arizona. Stanford's last team triumph came in 2017 at The Goodwin. After contending in his last two events, senior Brandon Wu captured his first collegiate title in

dramatic fashion. Playing one group ahead of junior teammate David Snyder, Wu posted a 3-under-par 67 to finish as the clubhouse leader at 4-under 206. With darkness falling, Snyder poured in a 40-foot birdie putt on the 18th green to force a sudden death playoff. "He's notoriously the best putter on the team," said Wu. "We all had a feeling this could sneak in. Phenomenal putt, dead-center." Wu won on the first extra hole and said it was worth the wait to win his first title in his last regular-season home event. "It' so special," he said. "We only get to play at home once a year, so it's an awesome experience. Beyond that, it was cool to see all your teammates and Stanford family come out to watch and support you." Conrad Ray, the Knowles Family Director of Men's Golf, called it a storybook ending. "To have a guy have so many close calls and a great career at Stanford over the course of four years and play in almost every tournament and have his first win come in The Goodwin in the 50th is a pretty special deal," said Ray. "He'll remember that the rest of his life and we will, too." 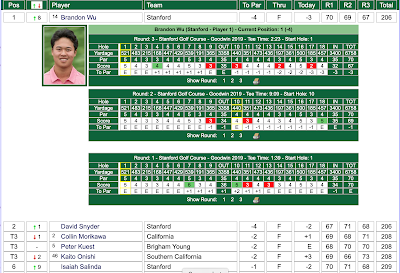 In his previous two starts before The Goodwin, Wu finished third at the Southern Highlands Collegiate and placed second at The Prestige. He became the Cardinal's 16th individual champion, the first since Maverick McNealy in 2015. Saturday's victory was the first by a Stanford player since 2016, when McNealy captured the Nike Collegiate Invitational. That earned him a share of the program's all-time win record of 12 shared by Tiger Woods and Patrick Rodgers. Competing against a strong field, the Cardinal received contributions from throughout the lineup in the 54-hole tournament. Wu, Snyder (second) and senior Isaiah Salinda (sixth) secured top-10's. "I really believe in this team and I've been saying it a lot," Ray said. "Sometimes that's the hardest part because you have to convince these guys they can play. Hopefully, we can ride the momentum."Junior Henry Shimp tied for 45th and freshman Daulet Tulebayev tied for 60th. The White team earned a share of 19th and was led by sophomore Nate Menon (t-29). Stanford returns to competition April 15-17 at the Western Intercollegiate hosted by San Jose State at Pasatiempo Golf Club in Santa Cruz, Calif. The tournament will be televised by Golf Channel.

ROUND TWO RESULTS: Stanford Athletics
Host Stanford surged into the lead after two rounds in the 50th playing of The Goodwin at Stanford Golf Course. The Cardinal put together a best four-out-of-five total of 1-under 279 on Friday morning, matching Thursday's finish and has a 36-hole score of 2-under 558. Washington is second at 565 and Cal is third at 566. The three schools will play together in Saturday's final round. "Excited about our chances tomorrow," said Conrad Ray, the Knowles Family Director of Men's Golf.  "A great opportunity to build on our spring campaign and gain experience against high quality teams. The goal is stay aggressive and play how we know we can. The results will take care of themselves." Individually, three Cardinal players reside in the top-10 and four are in the top-15.Twenty-six schools are participating. 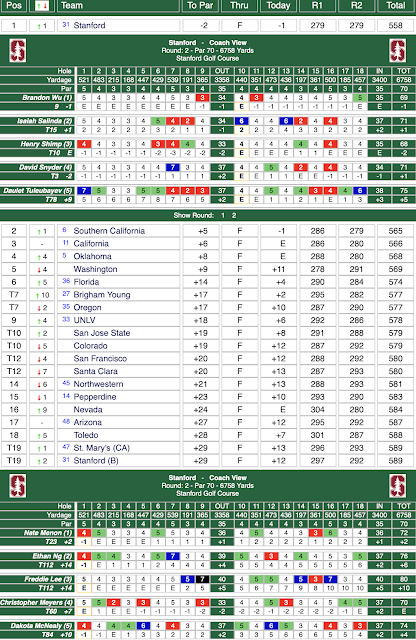 Playing in cool, damp conditions, Stanford received sub-par rounds from junior Henry Shimp and senior Brandon Wu on Friday. Shimp posted a squad-best 2-under 68 and Wu birdied his last hole – the par-4 ninth – to secure a 69.

Individually, Snyder is tied for third at 2-under 138, while Wu is ninth at 1-under. Shimp is tied for 10th at even-par and Salinda has a share of 15th at 1-over. Tuleubayev is tied for 78th.

Kaito Onishi of USC is the individual leader at 5-under 135. He holds a two-stroke cushion over Collin Morikawa of Cal.

Two Stanford teams are competing. The White squad is tied for 19th at 29-over 589.

Spectators are welcome and admission is free.

ROUND ONE RESULTS: Stanford Athletics
Host Stanford continued its strong spring by a combining for a 1-under-par 279 in challenging conditions Thursday in the opening round of the 50th Goodwin at cool and partly cloudy Stanford Golf Course. Morning rain softened the already wet and newly renovated course, making it play longer than its listed 6,758 yards. Thick rough, afternoon breezes and light sprinkles added to the difficulty. Early starter Washington posted the best round of the day with a 2-under total 278, while the Cardinal led the afternoon wave. The 27-team field includes two contingents from Stanford – the Cardinal and White teams. The latter is 21st at 17-over 297. 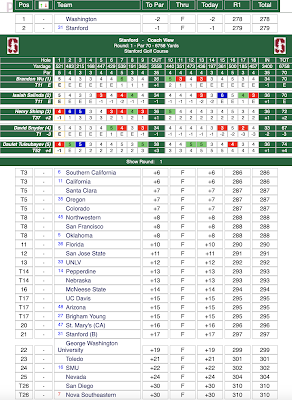 Junior David Snyder sparked the Cardinal by matching his career-best score in relation to par with a 3-under 67, forging four birdies and only one bogey. He finished strong, securing birdies at the par-4 15th and par-3 17th holes and shot a 2-under 33 on the back side. Snyder shared the first-round lead with Derek Ackerman of Santa Clara and Daniel O'Loughlin of Colorado. Stanford senior Brandon Wu continued his good play with a 70, tallying two birdies and two bogeys to earn a share of 11th with senior Isaiah Salinda. The latter also carded four birdies and saved his best for last, holing a lengthy putt from off the green at the par-4 18th. Junior Henry Shimp rebounded from two early double-bogeys with four birdies to post 72 and is tied for 37th, while freshman Daulet Tuleubayev added a 74 is tied for 52nd. The White team was led by junior Nate Menon with a 70 (t-11), thanks to an eagle at the par-5 16th hole. Freshman Freddie Lee shot 74, junior Dakota McNealy 76, senior Chris Meyers77 and freshman Ethan Ng 78.

BACKGROUND
The Tournament• Stanford will play host to The 50th Goodwin (March 28-31) at Stanford Golf Course.  • Originally called the United States Intercollegiate, the event was renamed 'The Goodwin' prior to the 2014 edition in honor of former Cardinal head coach Wally Goodwin. He coached at Stanford from 1987-2000, and his tenure was highlighted by winning the 1994 national title. Goodwin was named national coach of the year in 1992 and 1994, and was inducted into the Stanford Athletics Hall of Fame in 2018. • Goodwin recruited and coached standouts such as Tiger Woods, Casey Martin, Notah Begay III, Patrick Rodgers, Joseph Bramlett, Joel Kribel, Rob Grube and current Stanford head coach Conrad Ray, among many other stars from Stanford's proud golfing tradition.  • Stanford has claimed 15 team victories and 15 individual titles at the event, the most of any program in each category. The Cardinal captured the first team and individual titles in 1968 during the inaugural year of the tournament. • Stanford alumni who have won the event include Sandy Adelman (1968), Gary Vanier (1970), Tom Watson (1971), Conrad Nilmeier (1973), Dave Baskins (1974), Mike Peck (1976), Mike Milliken (1990), Casey Martin (1995), Joel Kribel (1996-97), Philip Rowe (2002), Rob Grube (2006-07) and Patrick Rodgers (2014). • The Cardinal holds the event's longest team winning streak at six (1970-1975). The Coverage • Live results will be available throughout the event at GoStanford.com, with updates available on Twitter (@StanfordMgolf), Facebook (StanfordMgolf) and Instagram (@StanfordMgolf). The Field• The 26-team field is comprised of No. 4 Oklahoma, No. 7 USC, No. 9 Cal, No. 13 Pepperdine, No. 31 BYU, No. 32 Stanford, No. 34 UNLV, No. 37 Oregon, No. 41 Florida, No. 42 Nevada, No. 44 Northwestern, No. 47 Arizona, No. 53 St. Mary's, No. 58 San Francisco, No. 60 UC San Diego, No. 61 San Jose State, No. 80 Washington, No. 87 Santa Clara, Colorado, McNeese State, Nebraska, SMU, Toledo, George Washington Nova Southeastern and UC Davis.            Last Year • No. 8 Oklahoma combined for an impressive 54-hole score of 24-under 828 to claim the team title by three strokes over No. 10 Cal at Harding Park Golf Course in San Francisco by posting rounds of 279-269-280. Stanford placed third at 16-under 836. • Norman Xiong of Oregon fashioned rounds of 65-65-68 to capture the individual title with a 15-under total of 198. Jeffrey Swegle of Sanford secured a career-best runner-up finish at 9-under 204 and fired an 8-under 63 in the first round, matching the fifth-lowest score in program history. The Format • The event will span three days and features 54 holes of stroke play. Team scores will consist of the cumulative total of its four best scores out of five per round. For the purposes of tournament honors and awards, ties will be split per NCAA Championship tie-breaking procedures. • There will be morning and afternoon sessions each day with starting times off the first and 10th tees. The first session starts at 7:30 a.m. PT and the afternoon wave begins at 12:00 p.m. on the first tee and 12:25 p.m. on the 10th tee. • Pairings remain the same for the first two rounds. Teams will be repaired Saturday according to scores.• The tournament is open to the public and admission is free. Cardinal Contingent • Stanford will compete with two teams. The Cardinal (A) group starts off No. 1 on Thursday from 12:55 p.m. to 1:39 p.m. and is paired with Oklahoma and USC. The White (B) squad starts off No. 1 from 1:50 p.m. to 2:34 p.m. and is paired with UC San Diego and Nova Southeastern.
Posted by Bob Stevens at 6:54 AM