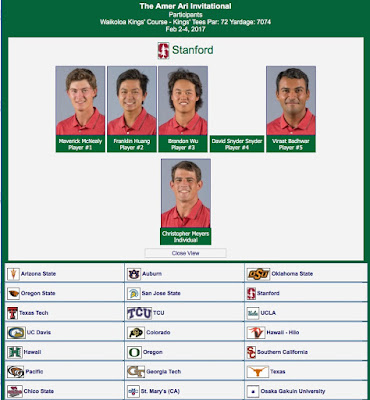 Background
A strong field of 21 teams is competing in this year's American Ari Invitational, hosted by Hawaii-Hilo University.  The field includes 7 Pac-12 teams and several national powers such as Oklahoma State and Texas.

The weather forecast is favorable with sunny skies, temperatures in the low eighties and light to variable winds topping out at 15 mpg, so scoring should go low.

Next up February 2-4 will be The Prestige played in La Quinta in an event co-hosted by Stanford.  Top ten team results and Stanford's final round scorecards are shown below.

Top team results and individual Stanford scorecards for round two are included below - click to enlarge.

Round 1 Results:
Stanford finished in 3rd place after a 10-under par 278 total for round one, 8 shots behind leading Texas Tech.  The Cardinal was led by Maverick McNealy's 4-under 68 (4 behind the individual leaders) followed by freshman David Snyder's 69, Viraat Badhwar's 70 and 71s by Franklin Huang and Brandon Wu.  Playing as an individual, Chris Meyers had an opening 75.

Team and Stanford scoring is shown below - click to enlarge.