Stanford sends six players to compete in The Gifford hosted by UCLA and played at Silverado Resort's North Course in the Napa Valley, which hosted October's PGA TOUR Safeway Open.  A unique format combining stroke and match play will be used this year.

The Gifford Collegiate, which in the past had featured 54 holes of stroke play, will be played under a new format this year. The eight-team field will play 36 holes of stroke play on Monday to seed into Tuesday and Wednesday's match play. Tuesday will feature the match play quarterfinals in the morning and the match play semifinals/consolation in the afternoon, followed by the Wednesday championship and consolation bracket matches. Each team will play three match-play contests.

See the top three team and individual scoring results below --- click on image to enlarge. 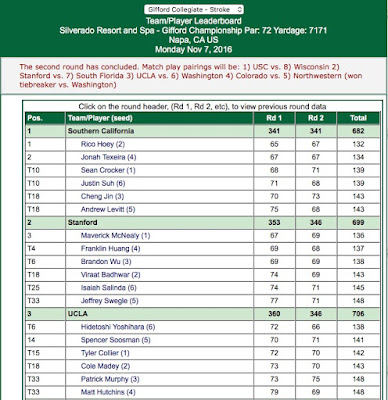 Match Play Results:
Match 1 - Stanford was paired with the 7th seed South Florida in the first round of match play with the Cardinal winning a close math 3-2-1.  The individual match results are show below - click to enlarge.

Match 2 - Stanford went up against 6th seeded Washington and won 3-2-1 in the second round of match play.  Swegle and Salinda each won 6 & 5, Wu won 4 & 3, Badhwar won his final hole to tie his match and McNealy lost his final 3 holes to lose 1 down.  Full results of match 2 are shown below - click to enlarge. 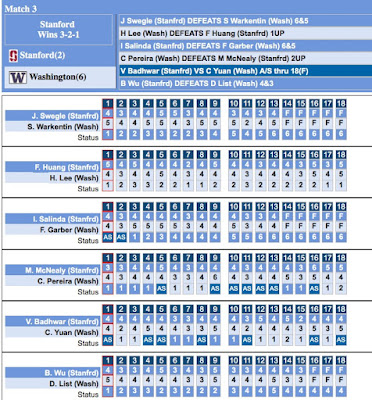 Final Match - Stanford and USC battled to a tie in the finals with each team winning 2, tying 2 and losing 2 matches.  A tie breaker based on the holes won in each match of the finals was won by USC  with 7 versus Stanford with 6.  Badhwar and McNealy won, Swegle and Huang tied and Salinda and Wu lost.  Full results of the finals are shown below - click to enlarge. 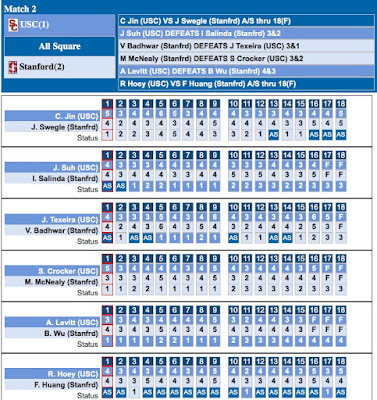