Stanford competes in the Nike Invitational at famed Colonial CC in Ft. Worth, Texas

Live Scoring | Colonial CC
Nike sponsored the inaugural Swoosh Invitational at famed "Hogan's Alley" Colonial CC in Ft. Worth, Texas, longtime home course of Ben Hogan and a regular PGA tour stop for many years.  A strong field of 10 teams is shown above.

Two Stanford players are competing for the first time this season, junior David Boote (back from his worldwide travels to compete in the World Amateur Team Championships in Japan and in a European Tour event in Wales) and freshman Bradley Knox.  Rounding out the team are Maverick McNealy, ranked #1 in collegiate golf, Jim Liu and Viraat Badhwar.

Final Results:
The Cardinal moved up 3 places to finish 2nd, 6 strokes behind Oregon, with a solid final round of 3-over par 283 led by a 3rd place finisher Maverick McNealy (71-66-69 206 4-under).  Maverick finished 4 strokes behind Thomas Lim of Oregon, and 2 strokes behind Cheng-Tsung Pan of Washington.  Congrats to Maverick for his outstanding season start with two wins and this top 3 finish.  Stanford had the tournament's lowest round (2nd round 281) and tied for 2nd with its final round 283 total.

The Pac-12 garnered 4 of the top 6 spots in the tournament.  Team and top 5 individual scoring for the first 7 teams is shown below --- click to enlarge. 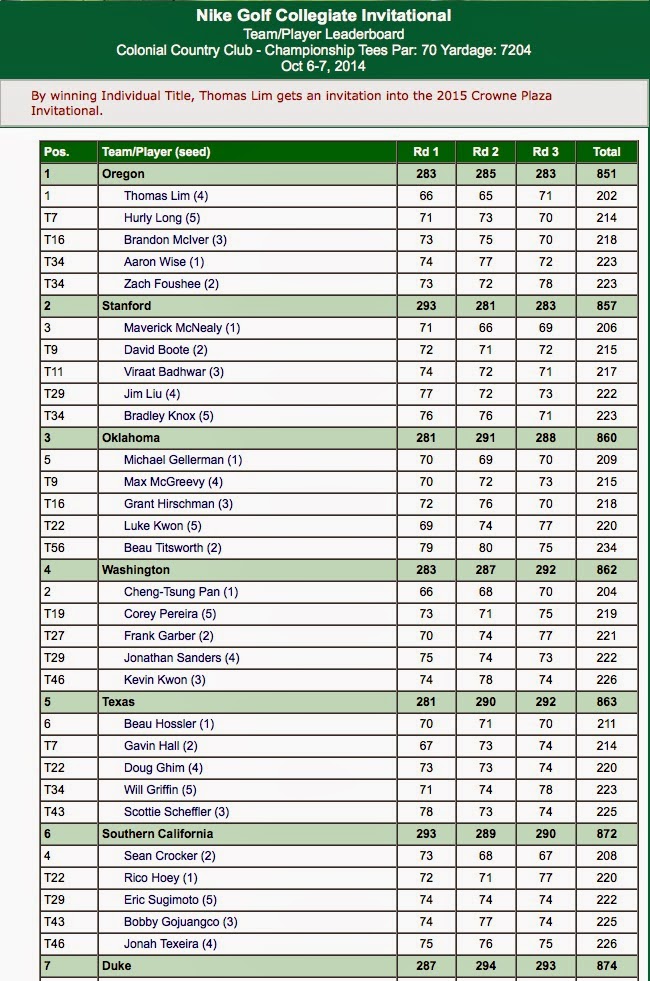 Next up for the Cardinal is a trip to Georgia to play the US Intercollegiate October 17-19 against another strong field.

Rounds 1 & 2 Results:
Stanford sits in 5th place after the first two rounds, but only 6 strokes behind leading Oregon following a strong 2nd round, 1-over par 281 total, which tied the low round thus far.