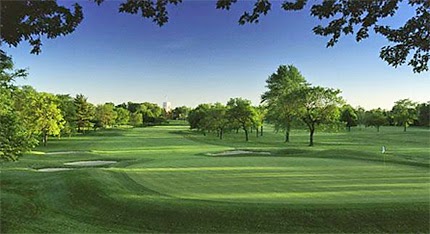 Stanford comes into the Illini Invitational off a 15-stroke win at the SW Intercollegiate hosted by USC.  The same 5 players, Maverick McNealy, Jim Liu, Viraat Badhwar, Patrick Grimes and Dominic Francks who competed recently are representing the Cardinal.

Final Results (provided by gostanford.com)
Maverick McNealy picked up his second win in as many outings Sunday by claiming top honors at the Olympia Fields/Fighting Illini Invitational.

McNealy, who collected the first win of his collegiate career earlier this week at the Southwestern Intercollegiate, fired three consecutive rounds of 71 to finish 3-over at the par-70 Olympia Fields Country Club. He shared the top billing with host Illinois’ Dylan Meyer.

“I’m happy with how the guys hung in there, but we’ve got much to work on,” said Conrad Ray, Stanford’s Knowles Family Director of Men’s Golf. “It’s early in the year, so it was good for us to play a challenging course to see what we have team-wise.

“Maverick has been very solid these last two weeks, and two medals in a few strong fields is a great start to his year with added confidence. Jim Liu has had two great weeks, too. It’s good to see him playing better and on the right track.”

Liu’s even-par third round was the best score of any Cardinal during the 56-hole event. He was 4-under on the front but had four bogeys on the back, eventually finishing 12th overall at 8-over.

The Cardinal has a few weeks off until traveling to Forth Worth, Texas, for the Swoosh Invitational (Oct. 6-7).

Round 2 Results:
On another cool, windy but sunny day when scoring improved, the Cardinal failed to keep up with the leaders and fell 17 strokes behind Baylor and 9 behind host Illinois.  Stanford's 2nd round total of 299, or 19 over par, only beat 3 other teams in the field.  Team standings are included below:

Stanford was once again led by Maverick McNealy who shot another 71 and is tied for 1st overall.  Patrick Grimes posted a 73, Jim Lie a 76, Viraat Badhwar a 79 and Dominic Francks an 80.  Round 2 scorecards are shown below:

Round 1 Results:
In cool, rainy conditions at this demanding venue, Stanford completed round 1 at 14 over par  and is tied for 3rd, 3 behind Virginia Tech and 1 behind Florida State.  Team standings are shown below: