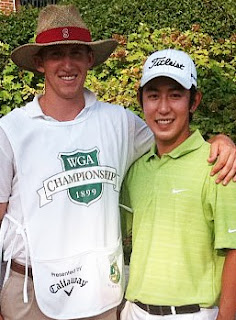 With his teammate Wilson Bowen caddying, rising junior David Chung wins the Western Amateur at Skokie CC in Glencoe, Illinois.  The Western Amateur is considered the 2nd most important amateur championship in the US behind only the US Amateur, knocking off 4 Pac-10 golfers in the process.  This impressive win comes one week after David won the Porter Cup  in NY, probably the 3rd most important amateur event.

With this win David will jump to #2 in the world amateur rankings maintained by Golf Week.  His Stanford teammates Andrew Yun (#18), Sihwan Kim (#36), Steve Ziegler (#69) and Cameron Wilson (#118) are all in the rankings as well.

In the finals David beat UCLA junior Gregor Main 2 & 1 on the strength of a 5-under round capped off by birdies on the 14th and 15th holes.  To reach the afternoon finals he beat former ASU player Chan Kim, who will turn pro soon, in the semis on the 19th hole in the morning in a round with 5 birdies.


“The Western Amateur is definitely the biggest tournament I’ve won,” Chung said after receiving the George R. Thorne championship trophy that goes to the tournament winner.  “It’s held on one of the most prestigious courses in the nation, it’s a grueling format, and the match play element of it makes it mentally demanding. It’s a lot of golf.  It’s an endurance test.”
Chung, 20, who won the Porter Cup last week in Niagra Falls,
came back from two holes down early in the final match, birdieing five of his first six holes on the back nine. Chung, who uses a long putter, was playing so well that when Main reeled off three consecutive birdies on holes 11, 12, and 13, he picked up only one hole, and the match remained tied as the two players walked to the 448-yard par 4 14th.
“Making birdie on 11, 12, and 13 and only getting one back there was tough,” Main said.
On the 14th, Chung drained a 20-foot uphill putt for birdie while Main’s tee shot hit a tree and dropped down into a fairway bunker 195 yards from the green.  Though he hit the green from the bunker, Main had little chance to hole his cross-country 60-foot birdie putt – and didn’t. Advantage, Chung.
“That was a great putt to have go in,” said Chung, who had missed a couple of putts earlier in the match.  “It was like retribution.”
On the driveable par 4, 325-yard 15th, Main’s tee shot just missed hitting the flagstick by inches and wound up just over the green in the rough. Meanwhile, Chung smiled and high-fived his caddie and Stanford teammate Wilson Bowen of nearby Winnetka, Ill., after they watched his high-draw tee shot fly the pin and end up on the green some 40 feet past the hole.
Main’s eagle chip from the rough slid six feet past the hole and he missed the come-backer that would have given him another much-needed birdie.  Chung lagged his first putt to just over two feet and calmly made birdie to go 2-up with three holes to play. Both players bogeyed the par 3 250-yard 16th, where Main drove into the greenside bunker and Chung three-putted; still Chung was dormie.
Chung closed out the match on the par 4 454-yard 17th, when he got up and down from the right greenside bunker, making a 4-foot par putt while Main missed the 30-footer for birdie he needed to win the hole and extend the match. Chung won 2 and 1. On Friday, Chung got up-and-down from the same bunker to save par against Jeffrey Kang before winning the match on the 18th hole.
“I knew I could get that up-and-down on 17,” Chung said.
Afterward Main complimented Chung saying, “His swing is just solid.  He doesn’t make mistakes with that long putter…It came down to a putting contest and he made a few more than I did.”


Here's an excellent article by Golf Week about the event and David's win.
The day before David beat USC incoming freshman Jeffrey Kang 1-up and in the afternoon match beat ASU senior Scott Pinckney in 21 holes.

Five other Stanford players competed in the event.  The tournament format was medal play with a cut to the low 44 & ties after 2 rounds and to the low 16 after 3 rounds leading to match play.  David advance to match play with rounds of 69-72-72 to tie for 14th.  Andrew Yun shot 76-67-74 to finish T29,  Steve Ziegler shot 71-74-75 to T40, Cameron Wilson had 74-70-77 to T46, Sihwan Kim had 69-78 to miss the cut (Sihwan stayed to caddie for David in the 3rd round of stroke play), and Wilson Bowen shot 77-73 and missed the cut as well.  Wilson, an Illinois native, stayed and caddied for David after missing the cut -- on a personal note Wilson's mother Margot grew up playing at the host Skokie CC as her parents were members.
Here are a few comments from the official website about and by David on his earlier matches:


Chung spent his day battling tough Pac 10 foes, winning in 21 holes over Arizona State senior and 3rd seeded Scott Pinckney in the morning and 1-up over incoming USC freshman Jeffrey Kang in the afternoon.
“I just played the best round of golf I’ve played all summer,” said Chung shortly after shooting a 4-under 67 (including conceded putts) against Kang, who made the only bogey of the match.
Chung used his extra-long putter and extra-long driving ability to edge Kang. Chung said he rode the confidence he gained by holing a five-foot par putt on No. 13 to roll in a 10-foot birdie putt on No. 14, a 12-foot birdie on 15, and an 8-foot par-saving putt on 17.
It was on the 250-yard par 3 16th where Kang, who played solidly all day, made his only mistake.  After hitting 3-wood from the tee to the right center of the green, his uphill 30-foot putt lipped out and spun five feet past the hole, leaving him with a tricky downhill-sidehill putt for par.  Kang lipped it out and made bogey, the only one of the match by either player.  Meanwhile, Chung drew an 18-degree hybrid to 35 feet directly below a left-rear pin placement and knocked his first putt to an inch and parred.
“I had to roll the ball into the hole to stay in the match,” Chung said.  “I willed them into the hole, pretty much. “
During Thursday evening’s annual Sweet 16 dinner, Chung said the players were looking over the history of the Western Amateur, which began in 1899. “It’s amazing how many of the top 16 have gone on to win major championships.”
Posted by Bob Stevens at 4:33 PM