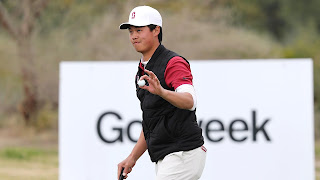 BACKGROUND - By Stanford Athletics
The Stanford men's golf team swings back into action on Monday at The Prestige Presented by Charles Schwab at PGA West in La Quinta, Calif. Fifteen teams and seven individuals will compete in the 19th annual tournament at the Greg Norman Course, including four top-20 schools, headed by defending NCAA champion Oklahoma State. For the first time, Golfweek will host live streaming coverage of the Tuesday and Wednesday rounds, with Will Haskett and Steve Scott calling the action and Lance Ringler adding analysis. The Cardinal lineup will consist of Brandon Wu, Isaiah Salinda, Henry Shimp, Daulet Tuleubayev and Ethan Ng. David Snyder, Christopher Meyers, Nate Menon, Freddie Lee and Dakota McNealy will participate as individuals.
Stanford tees off Monday morning on the first tee from 8:25 a.m. to 9:09  a.m. and is paired with Oklahoma State and host UC Davis. Cardinal individuals start on the 10th tee and go from 9:31 a.m. to 9:53 a.m. Other participating teams are No. 12 Pepperdine, No. 17 LSU, No. 18 Arkansas, East Tennessee State, Iowa State, Northwestern, Notre Dame, Oregon, San Diego State, Stirling (Scotland), UCLA and Utah.The Norman Course measures 7,100 yards and plays to a par-71.
Posted by Bob Stevens at 7:17 AM