Stanford competes in Mexico in the Querencia Cabo Collegiate

Team scoring and Stanford's final round scorecards are shown below - click on image to enlarge. 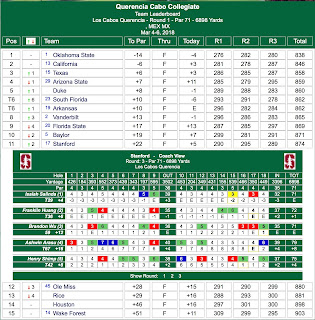 Cal's 278 total on the day was the best in the field and they trail leader Oklahoma State by one.   Look for a strong final round from the Cardinal to finish with some positive momentum.  Second round scoring is shown below - click on the image to enlarge.


Round 1 Results:
There is work to be done after round 1 is in the books with Stanford 14 strokes behind leading Oklahoma State.  The Cardinal was led by freshman Ashwin Arasu with a fine 70 to put him in a tied for 8th overall.  Sophomore Henry Shimp followed with a solid 71 leaving him tied for 15th.