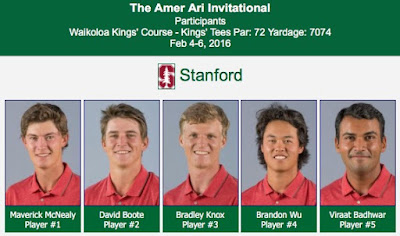 The 2016 season starts on the Big Island of Hawaii as Maverick McNealy, David Boote, Bradley Knox, freshman Brandon Wu and Viraat Badhwar lead the Cardinal against 18 other teams including 7 from the Pac-12.   Freshman Isaiah Salinda will be competing for Stanford as an individual.

Final Results:
A final round team total of 4-under 284 left Stanford in 6th place overall, 11 strokes behind the winning USC total.  Stanford was led by a 3rd place finish by top ranked Maverick McNealy (68-68-67 203 3rd) after a final round 67 that included 6 birdies and only one bogey.  Maverick continued his outstanding season with his fifth top 5 result (including 3 wins and a tied for 5th), finishing three strokes behind Oregon's individual winner Aaron Wise who shot the tournament low round of 64 on the final day.

Playing as an individual Isaiah Salinda had a solid final round 70 which included 7 birdies and 5 bogies to tie for 30th on rounds of 70-74-70 214.  A promising note, Isaiah's 17 birdies in the tournament put him 4th overall in that category, only 3 behind tournament winner Aaron Wise and two more than Maverick had in his 3rd place finish.  Isaiah was also 2nd in low par 3 scoring at 2.75 strokes/hole for the event.

Final team standings and 3rd round scorecards can be found below - click on image to enlarge:
The Cardinal next moves onto Mexico to play in the Querencia Cabo event starting February 28th.

The top 6 teams and Stanford scorecards are shown below - click on image to enlarge.
Round 1 Results:
Stanford is tied for 1st after round one with Southern California at 10 under par.  The Cardinal was led by David Boote's strong 5-under 67, followed by Maverick McNealy with 68, Viraat Badhwar with 71, Brandon Wu at 72 and Bradley Knox with a 75.  Isaiah Salinda fired a 70 as an individual.

Team and individual scoring can be found below -- click on image to enlarge.