Final Results
After starting the day with a 21 stroke lead, Stanford cruised to a 15 stroke victory over Washington to capture its first Pac-12 Championship in 20 years.  California finished a distant third 29 strokes behind the Cardinal.  Stanford now has won 4 of its last 5 events and has a total of five wins on the season, the most since the 7 tournaments won by the 2006-7 national championship team.

Stanford was led by its superlative duo of Patrick Rodgers, who won his 5th individual title this season (and 10th in his 3 year career, only topped by Tiger Woods' 11 wins), and Cameron Wilson who finished third, 3 strokes behind Patrick.

“This is a special group and they’ve had an unbelievable run this spring,” said Conrad Ray, Stanford’s Knowles Family Director of Men’s Golf. “Patrick has been an incredible leader, and having both Patrick and Cameron finish in the top-5 together consistently is hard to beat. The freshmen have stepped up and contributed, which has helped carry us.

The top three team and individual scores are shown below:
Patrick fashioned a steady even-par 72 to win the individual title by 2 shots over Washington's Cheng-Tsung Pan who closed the gap with a 68 in his final round.  Patrick had rounds of 71-65-73-72 281 to finish 7 under par under tough conditions throughout --- his 65 was the lowest score by 3 shots in the tournament highlighted by 3 eagles on his final 9 holes. In his last 5 tournaments, Patrick has won four and finished second to teammate Cameron Wilson in one event.

“I couldn’t be happier for our team,” said Rodgers. “We’ve worked hard all year for this, and it goes back much further than the start of this season. All the guys who have put so much blood, sweat and tears into this program for the last 20 years dating back to our last conference title deserve a piece of this win. So many guys have worked their tails off and have put so much work into this program. Everybody is a huge part of this, and I couldn’t be more proud to be a part of the Stanford program.”

Cameron continued his brilliant play firing a final round 68 that included 5 birdies and only 1 bogey.  In his last 7 events, Cameron has won once, finished third 3 times and been in the top 10 in every tournament.  Cameron had rounds of 72-71-73-68 284 to finish alone in 3rd place. 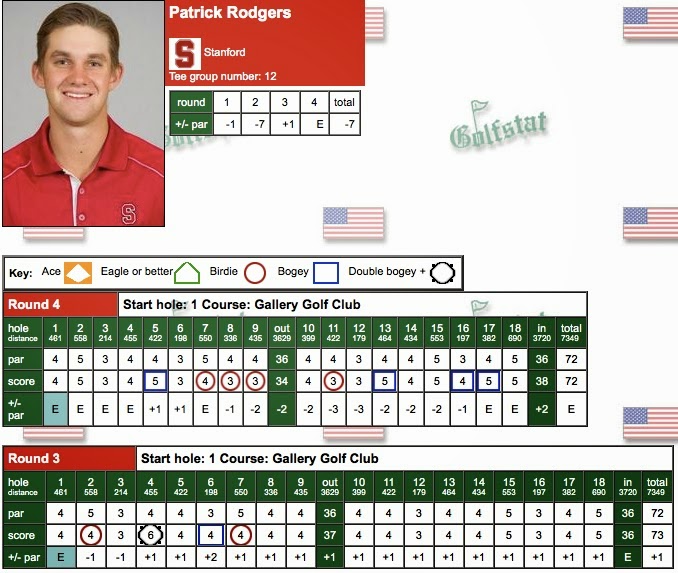 Although led by the dynamic duo, this year's team is marked by strong depth of quality play from David Boote and the three freshmen, Maverick McNealy, Viraat Badhwar and Jim Liu.   In the final round Maverick contributed a 70, Liu a 72, Boote a 73 and Badhwar a 74.  Each of the four played integral roles in the team's success throughout the late season run of success as the team has won 4 of the last five events and finished 2nd by 2 shots in the other.

Round 3 Results
Playing in gusting winds that sent scores higher for everyone, Stanford had the lowest team score for the third straight round, a 7-over par 367 total, and widened their lead to 21 strokes over California and 24 over Washington.  This year's team is showing excellent depth with all players making contributions and including the nation's top twosome of Patrick Rodgers and Cameron Wilson.

A steady final round would give the Cardinal their first Pac-12 championship in 20 years.  The high winds raised the average score for the field in round 3 to 77.32, compared with 74.72 and 75.91 for rounds two and one respectively.

“The putter was feeling good today,” McNealy said. “I missed a lot of putts yesterday and worked on a few things before today’s round to change that. We’ve been prepared very well for this. I got over my nerves after the first couple of holes yesterday. Playing with Cal and Washington made it a big day today. We did what we wanted to do by extending our lead, and we’d like to do that again tomorrow.”

Round 1 and 2 Results
Led by Patrick Rodgers' amazing 3 eagles on his final 9 holes, after two rounds played on day 1, Stanford is in 1st place, 6 strokes ahead of California in what is looking to be a two team race, as the next closest team, Washington, is 21 strokes behind.  Scoring conditions were tough as the course is challenging and made much more difficult due to the gusting winds that led to high scoring for most of the field.  The top three team and individual scores are shown below:

The forecast is for even stronger winds of 20-30 mph for the third round, with gusts over 40 mph expected.  The winds are supposed to pick up in the afternoon which will increase the challenge facing the top 3 teams who tee off together, late in round three, starting at 11 am.

Stanford is led by a surging Patrick Rodgers (71-65 136 1st) who finished 8-under par and 6 ahead of his nearest competitor.   A dramatic eagle 2 on the par 4 8th and two other eagles on the front nine par fives led to a sparkling 31 (5-under) back nine for Patrick.  Viraat Badhwar (72-70 142 T2) has played solidly in the windy conditions and is tied for 2nd overall.  Cameron Wilson (72-71 143 T7) also played steady to continue his strong play throughout the season.

“It was fun playing some good golf with some good guys,” Badhwar said. “I holed a few, missed a few, but overall my game was good today.”

The Lowdown
• Winners of two straight events and three of its last four, the third-ranked Stanford men’s golf team eyes its first Pac-12 Conference Championships title in 20 years when it travels to The Gallery (April 25-27) in Marana, Ariz. With five teams ranked among the top 20 in the nation, the competition should provide for an exciting weekend.

• Wilson, a recent selection for the Palmer Cup, is currently second in the latest Golfstat rankings. He enters the Pac-12 Championship coming off a victory at the Western Intercollegiate.

• Stanford will feature each of its three freshmen in this weekend’s lineup – Maverick McNealy, Viraat Badhwar and Jim Liu.

• The Cardinal has won four times this season. In the last 17 seasons, only one team surpassed four wins (the 2007 national champion team had seven victories).

• Arizona will serve as host of the 55th Annual Pac-12 Men’s Golf Championship.

• The top five individuals from each team with the lowest scores for any 18-hole round constitute the scoring members of the six member team for that given round. The team championship will be awarded to the squad with the lowest total combined score for all rounds.

Stanford at the Pac-12 Championships
• Despite earning the Pac-12 Conference team title trophy seven times, the league crown has eluded Stanford since 1994. For the 2014 edition, Stanford returns to Southern Arizona and the Gallery Golf Club in Marana, Ariz. The last Cardinal title was won 20 years ago just an hour south at Tucson National Golf Course.

• In 1996, Tiger Woods’ 61 at the par-72 Big Canyon Country Club in Newport Beach, Calif., was the second-lowest single round score in the history of the Pac-12 Championships. Only Paul Casey’s collegiate-record 60 in the 1999 league meet was lower. Woods was a Pac-12 Championships record 11-under in his round.

Heading into the final round, Arizona State had an eight-stroke lead but Stanford came back and fired 12-over while the Sun Devils shot 22-over to finish in fifth.

Throughout the tournament, the top three teams on the leaderboard remained the same. Cal took the title at 6-over, No. 5 UCLA was second and No. 7 Washington finished third.

The Last Time Out
• Cameron Wilson donned the blue letter jacket awarded to the Western Intercollegiate (April 12-13) champion after winning the event by two strokes over teammate Patrick Rodgers.

• The lefty Wilson (67-67-69) was 7-under through three rounds at the par-70 track designed by Alister MacKenzie, the mastermind behind the famed layout of Augusta National Club. Rodgers (65-69-71) took silver honors with a 5-under and Maverick McNealy (71-69-67) tied for sixth.

• Wilson ended his final regular season as a Cardinal with birdies on the final two holes for a come-from-behind win over Rogers, who was riding a three-tournament winning streak heading into the finale at Pasatiempo Golf Club.