GolfWeek Recap | Live Scoring | Southern Highlands GC
Final Results:
Stanford finished in a tie for 2nd, 2 strokes behind host UNLV, while Patrick Rodgers repeated as individual champion for his 8th collegiate win.  The field was the strongest of the season as the top 5 teams in the nation were competing under windy conditions on a very challenging course, Southern Highland GC in Las Vegas.
Patrick (74-69-74 217 1st) finished two shots ahead in the individual race that came down to the last couple of holes with several competitors still with a chance to win.  One behind with two to go Patrick finished with two pars while one competitor triple bogeyed the 17th and a second double bogeyed the 18th to seal the win for Patrick.  With this 8th collegiate victory, Patrick moves ahead of 4-time All-American Joel Kribel and only 3 wins behind Tiger Woods who remains the leader in all-time career wins at Stanford.


Quotes from an excellent GolfWeek article after the event: “This is the biggest regular-season golf tournament of the year. The best field, the best teams on a championship golf course,” Rodgers said. “I really felt like I had a lot to prove and we (Stanford) had a lot to prove this week. I hope this makes us better down the road. I came here trying to prove that I was one of the best players in the country. It’s truly an honor to be a champion back-to-back. I take a lot of pride in winning this golf tournament.”
“Credit to him to defend on this golf course,” said Conrad Ray, Director of Men’s Golf at Stanford. “I think he’s showing how mature his game is because he really didn’t have his best stuff this week. He continues to play solid and stick to his game plan and it served him well this week.”

Patrick's 3 round scorecards are included below. 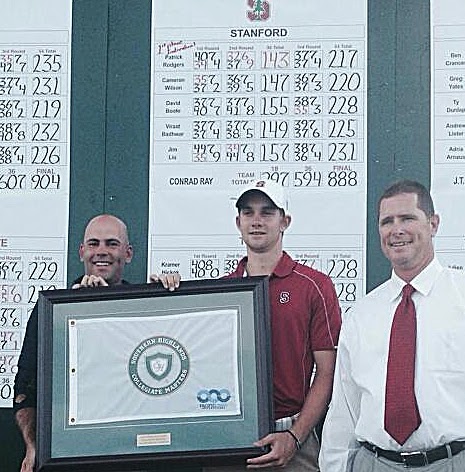 Stanford's next tournament will be at home as it hosts the US Intercollegiate March 28-30.  In this event it will honor former great coach Wally Goodwin as it celebrates the 20th anniversary of the 1994 national championship under Goodwin's leadership.

Round 2 results:
Stanford moved from 4th into 2nd place, 2 behind the leading host UNLV team, by tying for the low round of the day with a round played once again under tough, windy conditions.  Three other teams, UCLA, top ranked Alabama and 2nd ranked Oklahoma State are within 9 shots of the lead. 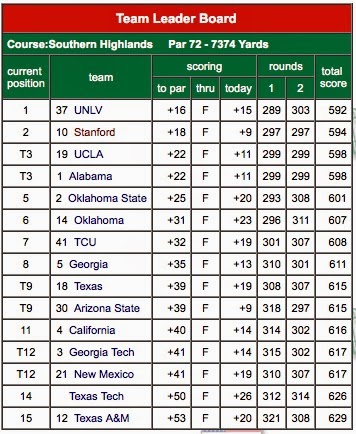 Patrick had 7 birdies in his brilliant round to move 2 ahead in the individual competition while Cameron was even par on the day until his final two holes when he finished double bogey, bogey.  Viraat continued his consistent play with a round that included only 3 bogeys while Jim had a wonderful 2-under par round going  through 14 holes until a double on 15 and an unfortunate 9 on the par 3 17th hold derailed his round.  Second round scorecards are included below.
“We fought hard through the front nine, but 17 and 18 are some tough closing holes and gave us trouble,” said Conrad Ray, Stanford’s Knowles Family Director of Men’s Golf. “Our guys are hungry to finish this off tomorrow.”

Round 1 results:
High winds gusting to 25+ mph challenged the field as scores were high on the already tough Southern Highlands tract.  The Cardinal stands in 4th place, 8 strokes behind host UNLV and 4 behind 2nd place Oklahoma State.  The team leaderboard below already finds some highly ranked teams well back of the leaders. 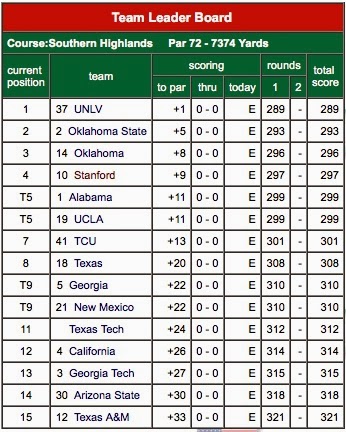 Scorecards throughout the field were dotted with high numbers and that included 3 of Stanford's players.  Cameron Wilson led the way with an even par 72 putting him tied for 6th overall.  Cameron's round included one double offset by an eagle 3 on the 18th hole.  Viraat Badhwar and Patrick Rodgers were at 74 but got there in very different ways.  Viraat was very steady with 3 bogies and 1 birdie while Patrick started with two bogies and a triple bogey 8 but remarkably played 3-under for the rest of his round with 3 birdies and no bogies.

“The course was firmer and faster today than in our practice round, and played tougher as winds were consistently around 20-25 miles per hour,” said Conrad Ray, the Knowles Family Director of Men’s Golf. “Wilson hung in there and played great. There was a bobble in the middle of his round, but he kept hitting good shots and was rewarded at the end with his eagle on 18.”

“This was Viraat’s first taste of big-time tournament golf,” Ray said. “You could tell he’s experienced, as he held himself together really well.”

David Boote managed to avoid bad holes but had 6 bogies and one birdie on his way to 77 while Jim Liu started with a triple bogey 7 on the first hole and added another 7 on the par 3 8th on his way to a 44 front nine --- Jim finished strong, however, with an eagle on the 18th for a 1-under back nine 35 giving him a 79 on the day.

Background
Stanford competes against an elite field in the Southern Highlands Collegiate Masters hosted by UNLV.  The nation's top 5 teams are entered with the Cardinal ranked #10 with a good chance to measure it's talent against the best.  Alabama is #1, Oklahoma State #2, Georgia Tech #3, Georgia #4 and California is #5.

Knowles Family Director of Men’s Golf Conrad Ray previews the event …
“The team is looking forward to competing well and testing their games on a great golf course like Southern Highlands. This event features many of the top squads in the country, and it will produce a very good opportunity to see what we have and where we are going at this juncture. The course conditions are typically tour quality with fast greens and tucked hole locations, so patience will be key on and around the greens. Our guys are feeling confident and ready to go.”