Cardinal returns to action on the Big Island in Hawaii 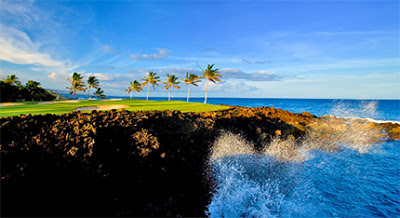 Round 3 Results (quotes from gostanford.com)
The Cardinal shot the lowest final round of the day, an 8-under par 280 to move up to a 7th place finish only 3 strokes out of third place.  The team finished the tournament 10 strokes behind UCLA and Washington who tied for first place overall, picking up 7 strokes on the lead in the final round.  Stanford shot progressively better each round scoring 287-285-280 team totals.  Only a couple of late bogies and a double bogey kept the Cardinal from finishing in 3rd place.
Certainly the week's highlight for Stanford was the breakout tournament performance by senior Steven Kearney who finished with a 5-under 67 to tie for 4th overall, his best career finish in a college tournament.  Steven's final round included 7 birdies and only 2 bogies.  Steven had rounds of 69-72-67 for a 8-under 208 total.  Well done!  The rest of the season looks bright with all five starters capable of competing for an individual title in any event.

"My short game was pretty good in this tournament," said Kearney who shot seven birdies today for a five-under, his best round of the tournament. "My driving accuracy was definitely one of my strong points. I only missed a few fairways these last three days and that really set me up to play well."  "I'd like to keep going with the momentum I had right now," said Kearney. "If I keep working on that putting, I feel like I could really shoot well next week in Palm Springs and help out the team again."

"We had some solid scores," said Philip Rowe, Stanford Enlight Foundation Assistant Coach. "Those one under pars were challenging in the breeze. Each player probably felt like they left a few shots out there, so there's plenty to work on."  "We had it going actually with a few holes left, but we gave a couple back in the end when we turned back into the wind on this course," said The Knowles Family Director of Golf Conrad Ray. "We're happy with the way the guys battled today. We wish we were a few slots up in the leaderboard but that's golf and it is awful close."

Next up is a short turnaround in at the PGA West courses at La Quinta, in the Palm Springs area, in the Prestige co-hosted by Stanford and played Feb 18-20.


Third round scorecards can be found below --- click to enlarge.
Round 2 Results
Stanford improved on its first round results by two shots, with a 285 3-under par team total but found itself moving backwards and not forwards in this strong field.  Washington now leads the 9th place Cardinal by 17 strokes after it shot a team total of 275.

Steady play by all five golfers resulted in a 70 by Patrick Rodgers, a 71 by David Boote and three 72's by Steven Kearney, Cameron Wilson and Andrew Yun.  It will take a top notch final round to move the Cardinal up in the highly ranked field.


Quotes below are from gostanford.com stories:
Two early birdies and an eagle pushed Rodgers to a two-under-par 70 leading the team on the second day. Rodgers, who was overcome by bogeys at the start of the tournament, came back strong after an initial five-over-par finish.  "I was comfortable with my game [in the first round] but things just didn't go my way," said Rodgers who is tied for 65th at three under par. "So in the second round, I just tried to continue feeling comfortable, hitting good shots, and capitalizing on the opportunities. I got off to a pretty shaky start, missed a few putts, but didn't hit the ball quite as well as I did yesterday, [although] I did a much better job at managing my round and scoring better."

Wilson, who was facing a two-over-par deficit, finished one-under with four birdies on the front nine to tie him for 45th. "My goal was to be very patient with myself," said Wilson. "The rounds were long and with the green grass around the green there's potential to get a few weird bounces. My goal was to be patient, accepting of the bounces good or bad, and take advantage of the par-5s."

"The guys battled hard and made a lot of nice pars," said The Knowles Family Director of Golf Conrad Ray. "We needed a little bit more offense today. I think they felt like they could have made a little bit more birdies while some other teams went lower than we did. I think it all evens out in the end."  "I think they managed their mental games in fashion today and hopefully they'll come out aggressive tomorrow with a lot of confidence," said Ray. "We haven't played our best round of the tournament yet and we're waiting for that tomorrow."

"I had a couple of birdies early on and unfortunately could not finish it off in the end with a couple of silly bogies," said Boote. "But it was an improvement by one shot from yesterday so I'm fairly happy."


Day two scorecards can be viewed below - click to enlarge.
Round 1 Results
Stanford finds itself tied for 8th against a very strong field, 10 strokes behind leading TCU after a 1-under team total of 287 in the first round.  The Cardinal was led by Steven Kearney's 3-under par 69 (T10) whose solid round included an eagle on 18, two birdies and only one bogey.  "I hit a really good drive down the middle," said Kearney about the eagle at the par-five 18th. "The short side was left there so we decided to hit a 6-iron because the downwind would hit it to about 20 feet. Then I finally made a good putt, put a good stroke on it, made it on the right edge and it fell in there."  "My goal today was just fairways and greens," said Kearney. "If the putts fall, then the putts fall."

Andrew Yun finished at 1-under par 71 after posting 5 birdies and 4 bogies.  "I birdied two of the par-5s by hitting on two and two putting," said Yun who finished with five birdies for one under par, putting him 23rd overall. "For the other ones I hit, my second shot was within 10 feet and I just made the putt."

"We had a lot of few easy opportunities get away from us on the course but we're still within striking distance with a couple of rounds left," said The Knowles Family Director of Golf Conrad Ray. "[Holes] 10 through 13 is a big stretch and we start around that area tomorrow. If we play those holes well and the guys manage their mental games well, we'll be in good shape for the last two days."

Individual scorecards from round 1 are included below:
Tournament Background
The Cardinal returns to action on the beautiful Kona side of the Big Island of Hawaii at the Waikoloa Beach King's Course as they send their strongest squad of the season to compete against a top field featuring 5 of the top 10 teams in the country. Top 20 teams with rankings include Texas (#2), Washington (#6), UCLA (#7), USC (#8), Georgia Tech (#10), Oklahoma St. (#14), Stanford (#15) and TCU (#16).

Andrew Yun, 2-time senior All-American, returns to the squad after taking the fall quarter off to try to qualify for the PGA Tour.  Having just missed qualifying, Andrew brings a wealth of talent and experience to the young team.  First team All-American sophomore Patrick Rodgers, ranked as one of the world's top amateurs, looks to continue his outstanding fall play which included two individual wins.

Rounding out the team are junior Cameron Wilson, looking to follow up his course record breaking 61 and second place finish at CordeValle in November, freshman David Boote from England who had three top 10 finishes in the fall, and senior Steven Kearney coming off strong play in qualifying for this event.  Junior Shane Lebow will be competing as a junior.