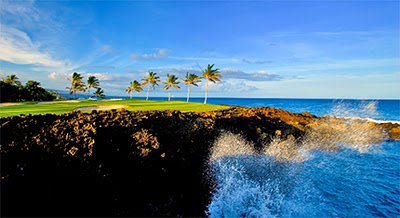 Feb 4 - Final Round 3 Results:
A final round 1-under 287 total left the Cardinal in 11th place in this tournament played at the Waikoloa Kings Course on the Big Island of Hawaii --- see tourney details below.  The first round 293 total put the Cardinal 15 shots behind the eventual winner, Oklahoma State, and despite a solid 2nd round 278 the final round left Stanford 28 shots behind the OSU.  Complete scoring by GolfStat.com can be found at http://golfstatresults.com/public/index.cfm?tournament_id=2445.

All in all a disappointing finish for the 11th ranked Cardinal who will have something to prove in the months ahead leading to the NCAA championship.  Final round scorecards are below --- click on image to enlarge.

Feb 3 - Round 2 Results:
The Cardinal rebounded well after a poor first round with a 10-under par 278 total, 15 shots lower than round one's total leaving the team in 11th position, 20 shots behind OSU.  Andrew Yun led the way with a 4-under 68 in a round that featured four birdies and no bogies.  David Chung followed with a 69, Cameron Wilson shot 70, Steve Ziegler a 71 and Graham Brockington a 72.

The second round total tied for the 4th best of the day behind UCLA's and Oklahoma State's leading 273 total.  Scorecards for each Stanford player are shown below - click on the image to enlarge:

A very tough first round for all found Stanford a whopping 22 shots behind the leading USC team.  A tournament overview is found at the bottom of this post.  Below are the scorecards for each player - click on the image to enlarge:

WAIKOLOA, Haw. - Thirteen teams managed to shoot under par on the first day of the Amer Ari Invitational being contested at the Kings' Course at Waikoloa on the Big Island on Wednesday. Unfortunately, Stanford was not included in the group that tamed the Kings' Course layout, as the Cardinal were five-over on its opening round and are in 19th place, 22 strokes behing first place USC.

Junior David Chung shot an even par 72 on his opening round and is tied for 42nd place on the leader board, 10 strokes behind Oregon's Daniel Miernicki, who shot an opening round 62. Miernicki has a four stroke cushion over San Jose State's Matt Hovan and USC's Jeffrey King and Sam Smith, who all carded rounds of 66 this morning.

Senior Graham Brockington is tied for 65th place after an opening round 65. Brockington had three birdies and four bogies on the front nine and shot even par on the backside.

Senior Steve Ziegler and freshman Cameron Wilson are tied for 76th after each shot two-over rounds of 72.
Sophomore Andrew Yun is tied for 88th after an opening round 75.


Jan. 31, 2011
STANFORD, Calif. - Stanford's men's golf team, ranked 11th by Golfweek, will open its spring season on Wednesday at the Amer Ari Invitational, where the Cardinal will defend its team title against one of the strongest fields in the nation.

The 54-hole event gets underway Wednesday at the Waikoloa Kings' Course on the Big Island. Live scoring will be available on GolfStat.com -http://golfstatresults.com/public/index.cfm?tournament_id=2445.

"It will be nice to be at close to full strength for the first tournament of the spring," said Ray. "It's probably the best field we will see this spring outside of the NCAA Championships and we've been lucky enough to fare pretty well over there the past couple of years. The Kings' Course is a great test of golf."

Yun was Stanford's most consistent player in four fall events, carding two top-10 finishes highlighted by his first collegiate individual title at The Prestige. He also tied for fourth at the Isleworth Intercollegiate and narrowly missed a top-10 finish at the Fighting Illini Invitational at Olympia Field, where he tied for 11th.

Ziegler, whose best finish in the fall was a tie for 14th at the Isleworth Collegiate, will hold down the No. 2 position in this event behind Yun after a strong qualifier.

Chung, currently ranked second on the Royal & Ancient's World Amateur Golf Rankings, finished tied for ninth at the Gifford Collegiate in his only event of the fall.

Wilson, one of two freshmen on this year's team along with Shane Lebow, was impressive in his four fall events, carding two top-10 finishes. In just his second collegiate event, the left-hander placed fifth at The Prestige at PGA West and closed the fall with a ninth place showing at the Gifford Collegiate.

Brockington will make his first start of the season.

"We have tremendous depth on this year's team," said Ray. "Five or six guys can win a tournament anytime out."
Posted by Bob Stevens at 6:40 AM