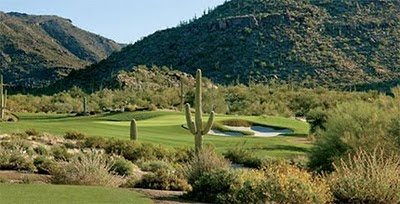 A full scoring summary can be found at: golfstatresults.com

SECOND ROUND RESULTS:
From gostanford.com --- MARANA, Ariz. - Stanford's hopes of capturing the Callaway Collegiate Match Play Championships came to an end today as the Cardinal suffered a 3-2 defeat at the hands of USC in the second round of the event being held at the Ritz Carlton Golf Club in Marana, Ariz.

Joseph Bramlett and freshman Steven Kearney accounted for Stanford's only two wins on the day. Bramlett defeated Matthew Giles, 1-up while Kearney downed Stewart Hagestad, 3 and 2.

The Trojans posted three wins at the top of the lineup. T.J. Vogel earned a 2 and 1 victory over Sihwan Kim, Steve Lim bested Steve Ziegler, 4 and 3 while Martin Trainer scored a 1-up victory over freshman Andre De Decker.

FIRST ROUND RESULTS:
Top seed Stanford beat Indiana 3 & 2 behind victories by Sihwan Kim (2 and 1), Steve Ziegler (3 and 2) and Steven Kearney (1 up). In the uniqueness that is match play, despite losing 3 & 2 Joseph Bramlett had the best first round scoring of any Cardinal player.

Next match is against Pac 10 rival Southern Cal which didn't get completed and will be finished up on day 2. Southern Cal was leading 2-1-2 well into the 2nd round --- the two tied matches of Bramlett and DeDecker will swing the result one way or the other. Once again Bramlett has played the best but again has run into a hot opponent.

STANFORD, Calif. - The second-ranked Stanford men's golf team has earned the top seed at the Callaway Collegiate Match Play Championships which will be held March 21-23 at the Ritz Carlton Golf Club, Dove Mountain in Marana, Ariz.

Stanford will meet 16th-seeded Indiana in Sunday's first round match beginning at 8:00 a.m., with the winner advancing to take either eighth-seeded USC or No. 9 TCU in the second round later in the afternoon.

Arizona State, the fourth seed, will tee off against Iowa, while fifth-seeded UCLA will meet Colorado State to complete the top half of the bracket.

Texas A&M, seeded third, will battle host school Arizona with the winner advancing to face the victor of No. 6 UNLV and No. 11 Middle Tennessee. Seventh-seeded Texas Tech will square off against San Diego, while No. 2 Washington will meet New Mexico in the first round.

Third round matches will be contested on Monday while the championship and consolation matches are slated for Tuesday.

It will mark Bramlett's second event of the season, as the talented senior had been sidelined with a nagging wrist injury for the better part of the last two years. He made his season debut earlier the month at the USC Collegiate Invitational, where he finished tied for 16th.

Having Joseph Back has been great," said Ray. "He has been playing solid and his best golf is ahead of him. He brings leadership and intensity which we need."

Ray is also anxious to see how Kearney and De Decker perform in this marquis event.
"I'm excited for Steven and Andre to get a shot in the line-up. Both have been working hard and are competitive and it speaks to our depth that they are able to qualify at this point in the season."

The Ritz-Carlton Golf Club, Dove Mountain a desert golf layout which is the home of the Accenture Match Play Championships, opened in January 2009. The course features elevation changes from 2,300 to 3,000 feet, and distinct character that blends naturally among majestic saguaros that stand along the surrounding Tortolita Mountain Range. Jack Nicklaus' first in the Tucson area in 25 years, the 27-hole Dove Mountain facility offers three distinct nines - the Saguaro, Tortolita and Wild Burro.

The Callaway Collegiate Match Play is to be contested on the Saguaro and Tortolita nines, just as is the Accenture Match Play Championship. They form a par 72 that measure 7,833 yards.
Posted by Bob Stevens at 2:46 PM