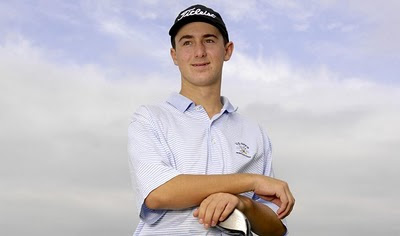 Cameron Wilson isn’t playing golf these days. Golfweek’s No. 8-ranked junior hasn’t been on a course since November, and he isn’t shagging balls at the range either. In fact, Wilson hasn’t swung a club in nearly two months and doesn’t plan to hit his next golf ball until March.

Wilson, 17, of Rowayton, Conn., is in the midst of his annual 3 1/2-month break from the game. While freezing temperatures and snow prevent him from playing golf during the winter, it hasn’t stopped him from competing. Instead, he satisfies his competitive desire on the squash court – hitting a small, hard black ball instead of a small, hard white one.

As the No. 4 player on the squad at St. Luke’s School in New Canaan, Conn., he’s not quite as accomplished of a squash player as he is a golfer. Then again, when you’ve achieved as much as Wilson has on the golf course, it’s understandable.

“I love the team aspect of squash,” said Wilson, who has committed to play golf at Stanford next season. “I’m far from the best, but it’s something that keeps me competitive and keeps me in shape during the winter. I don’t know that it’s good for my golf game, but I enjoy it.”

Though Wilson has fun on the hard court, his game on grass suffers. He usually ends squash season with problems in his golf swing. Because his right-handed backswing in squash is similar to his lefty backswing in golf (Wilson is ambidextrous), he picks up bad habits such as bending his knees too much, moving his head, shifting his weight forward too early and getting off balance.

“(Last year) his body motion on the backswing and downswing was off, and that was because of squash,” said Debbie Doniger, Wilson’s longtime coach who is a teacher at the Jim McLean Golf School, as well as director of instruction at Glen Arbor Golf Club in Bedford, N.Y. “In his backswing, he wasn’t leading properly. . . . But Cameron is a quick fixer.”

It usually takes Wilson a few weeks of practice to get rid of the bad tendencies. But after going through this routine for years, Wilson and his parents know to set his schedule light in the early part of the season, then rev it up as the year goes on.

In 2009, Wilson hit his stride in early summer and took off from there. He qualified for the U.S. Amateur, where he advanced to the second round of match play, made it to the quarterfinals at the U.S. Junior and won the AJGA Nationwide Insurance Junior.

Yet Wilson considers his 2009 Metropolitan Golf Association Player of the Year honor to be his most rewarding accomplishment because it was the product of a summer’s worth of good play. He’s the youngest MGA Player of the Year recipient, thanks to wins at the MGA Met Amateur Championship – where he also was the youngest-ever winner – and the MGA Carter Cup, where he beat players like David Pastore (No. 68 in the Golfweek/Titleist Junior Rankings), Sean Kelly (No. 75) and Mike Miller (No. 77; and winner of the Golfweek Junior Invitational).

Click here to read the complete article in Golf Week.
Posted by Bob Stevens at 12:03 PM