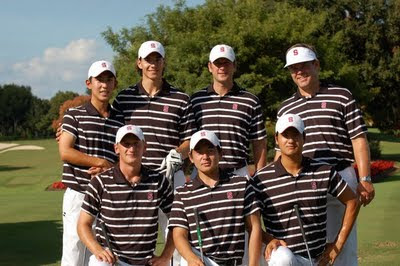 Stanford finished 3rd, 7 shots behind Oklahoma State and 2 behind Florida at the challenging Isleworth CC, home to a number of top professionals including Tiger Woods. Sihwan Kim led the way with rounds of 70-74-68, finishing 2nd individually, 1 shot behind the Bud Cauley -- Sihwan's finish was highlighted by his tournament low final round 68 in tough conditions. Sihwan's final round included 6 birdies and only 2 bogies.

The Stanford Daily reported: “It came down to the final round,” said coach Conrad Ray. “We hung in there on the back nine and it ended up being closer than we expected. The guys were a little disappointed that they didn’t place higher, but overall it was a good week.”

Junior Sihwan Kim was runner up by just one stroke on the individual ladder. Kim entered the final round tied for fifth place but drained six birdies to threaten the tournament individual winner, Bud Cauley of Alabama.

“Sihwan has really been doing great for us,” Ray said. “He has been handling his emotions well and has matured a lot. As a result, he has been playing better and is more confident on the green. He putted really well to make up for both good and bad shots this tournament.”

“Hopefully all of this will continue for Sihwan,” Ray continued. “I am seeing more and more of the Sihwan that we all know and love coming back.” Here is the complete Stanford Daily article.

Located in Windermere, Florida, the tournament invited many of the nation's top teams.

Complete scoring live can be found at golfstatresults.com.

Here you can view a terrific collection of practice round photos of the Stanford team.