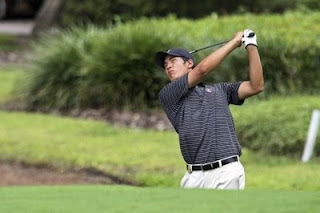 Sihwan Kim completed his brilliant play at the Nationwide Tour's stop at the difficult Ohio State Univesity Scarlet Course with a final round 69, tying the day's low score. The PGA's Nationwide Tour website reports on Sihwan as follows:

"Kim recorded the best finish of the seven All-American sponsor invitees with his tie for sixth in his first professional event. After an even-par front nine, Kim birdied the 10th and made eagle at the 12th when he holed a 25-foot chip from just off the green. A bogey at No. 13 dropped him back to 2 under where he eventually finished.

Kim came to the United States from South Korea in 2000 and was the second Stanford freshman to be named first-team All-American -- the first was Tiger Woods.

'I tried really hard to prepare for college golf because I saw a lot of guys fading away after they get into college," he said. "I learned from Coach (Conrad) Ray, who used to play on the Nationwide Tour, about game management and the mental game also.' "

Here's a final recap from the Nationwide Tour's website.

Prior reports in the event are provided below:

Sihwan Kim continued his outstanding play against the pros in a Nationwide Tour event with a 3rd round 70 leaving him 7 shots out of the lead.

His second round 71, 1-over the very tough Ohio State Scarlet Course in Columbus, left Sihwan 6-shots out of the lead in this Nationwide Tour event.

Continuing his very active summer tournament schedule, Sihwan Kim opened play at a Nationwide Tour event with an even par 72 first round score. You can follow results each day from the leaderboard link below.

Sihwan received a sponsor's exemption allowing him to compete with a number of former PGA tour regulars as well as a host of up and coming professionals who will be moving onto the big tour next year. As only the 2nd Stanford freshman to gain first team All-American honors (Tiger Woods was the other one), Sihwan has many opportunities to play in elite amateur and now pro events.
Posted by Bob Stevens at 8:16 AM