The Cardinal broke through with their season's first win led by Steve Ziegler's scorching final round 65, at the USC Collegiate played at North Ranch CC in Westlake Village. The team's 13-under score of 839 was the lowest in the 31-year history of the event. Ziegler's 9-under 204 total led to his first individual tournament win after rounds of 71-68-65. Steve shot a blistering 6-under 30 on his final nine holes. 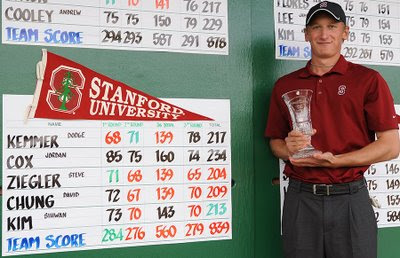 Roxie Dickinson of the Stanford Daily provides the following comments by Conrad Ray:
“The guys have been working so hard, I felt like it was just a matter of time before they would earn the win,” head coach Conrad Ray said. “After losing to USC in our last tournament, we definitely wanted to show them what we’re made of at their home event. [Sophomore Steve] Ziegler helped us to keep off the competition by shooting a great final round.”

“If you put yourself in a position enough times, you will improve regardless of what year you are,” Ray said. “Both Ziegler and Chung have played a lot for us this year. When we lost [junior] Joseph Bramlett to injury this year, a lot of guys have had to contribute more and step up to their positions. Luckily for us, it all came together this week.”

The Cardinal will be competing next at the Callaway Golf Collegiate Match Play Championship. This will be a different type of tournament for the Stanford men because it will be in a “match-play” style instead of their usual “stroke-play.” The NCAAs have converted to match-play style this year, where one team squares off directly against another team, more like a basketball or baseball tournament. The best golfer on one team faces off against the best golfer on the opponent’s team, and so on, for five participants per team, which puts more pressure on each individual golfer.

“The guys really enjoy the match-play format,” Ray said. “This tournament will help us anticipate what the NCAAs will be like. Though it does put more pressure on the individual golfer, it motivates the guys because it is a more ‘mano y mano’ game.” 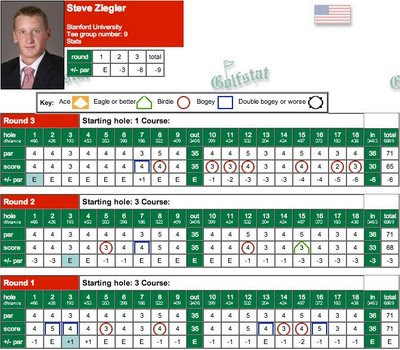 DAY ONE RESULTS:
Stanford jumped off to a 2-stroke lead after 36 holes played on day 1 of the USC Collegiate played at the private North Ranch CC in Westlake Village, CA. A trio of Cardinal players, Steve Ziegler, David Chung and Dodge Kemmer all shot 3-under rounds of 139 to tie for 2nd individually. Sihwan Kim posted a 1-over 143 while Jordan Cox shot a 160.

In addition, competing as individuals are Daniel Lim who shot 142 and Graham Brockington who shot 149 on the first day of play. The tournament wraps up with one more round being played on Tuesday, Feb 24th.
Posted by Bob Stevens at 7:32 AM