Joseph Bramlett gets back in the swing for #2 Stanford 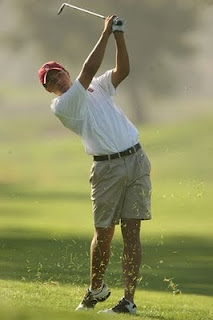 After missing nearly two years because of injury, Joseph Bramlett was understandably concerned about being able to compete against the top collegiate golfers in the country.

But that's the advantage of being on the Stanford men's golf team: Just to get into a tournament, you have to compete against the nation's top college golfers.

Cardinal golfers must qualify for each tournament by beating out their teammates, virtually all of whom were All Americans as juniors.

"As much as I was stressing out about qualifying, by the time I got to (the tournament), I was much more relaxed," said Bramlett, now a senior. "It pushed me to make sure I was ready."

Bramlett, from Saratoga, proved he was ready this week when he tied for 16th at the USC Collegiate in Westlake Village.
It was the top finish for the Cardinal, which placed a disappointing ninth against a strong field.

But there was no disappointment from Bramlett, who shot a first-round 3-under-par 68 and followed with a 73 and a 71 at North Ranch Country Club. It was his first competition since 2008.

Two separate injuries to his right wrist limited Bramlett to just nine tournaments over the past two seasons. This after a freshman season that saw the St. Francis High product post one of the 10 best scoring averages in Stanford history (71.5) and help the Cardinal to an NCAA title.

MORE --- click here to read the rest of the article.

Here are full results from Bramlett's first tournament back since 2008.
Posted by Bob Stevens at 6:26 AM